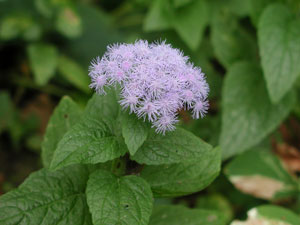 Over the years, I have bemoaned the fact that plant names keep changing and, instead of adding clarity, muddy the water and make the job of gardeners, nature lovers and those who write about these subjects ever more complicated.

While I bemoan these changes, most of them make sense as plant taxonomy (classification and naming) has become international in scope, and scientists have access to better and more thoroughly evaluated data on which to base their classification schemes. Let us explore how an Eastern American native plant I have long known as hardy ageratum or mist flower had a name change from Eupatorium coelestinum to Conoclinium coelestinum.

Mist flower is a perennial herb of the daisy family, with fuzzy heads of purplish tubular disc flowers borne at the ends of stems in early fall. Plants mostly are around 2 feet tall and spread by means of a rhizomatous root system that, in partially shaded moist sites, can form significant stands. The oppositely arranged toothed leaves are 2 to 3 inches long. At first glance, the mist flower does look much like the annual ageratum, at least when in full flower.

Linnaeus named our American mist flower Eupatorium coelestinum in 1753 in his Species Plantarum, giving it a lot of credence in botanical circles. Over the next two centuries, the genus Eupatorium became a dumping ground for “sort of looks like” asteraceous plants from throughout the world, ultimately ending up with an unwieldy 800 species classified in the genus.

Linnaeus’ classification system was built on what he called his “sexual system,” and based almost entirely on the characteristics of the flowers. This was quickly found to be too restrictive, and ever since his day, more and more data points have been added to the tally sheets taxonomists use to lump and/or split plants into various related groups. Starting about 1970, two Smithsonian Institution botanists, R.M. King and Harold Robinson, began sorting through the portion of the daisy family where Eupatorium resides. In 1987, King and Robison proposed an extensive revision of the genus that reduced the number of Eupatoriums to just 42 species.

In their new revision, only white-flowered species from North America, Europe and Asia were retained in the genus Eupatorium, while the remaining species were moved to 13 new and/or enlarged genera. With the publication of their paper, the 200-plus-year-old Linnaean names for familiar garden plants such as our mist flower (E. coelestinum) and Joe-Pye weed (E. purpureum) became Conoclinium coelestinum and Eutrochium purpureum, respectively. As late as the mid 1990s, the proposed revision was being ignored by some prominent taxonomists, but beginning in 1999, several detailed studies were published that added DNA analysis and largely confirmed the reclassification scheme.

Today even the stodgiest and most conservative taxonomists have adopted the reclassification. Unfortunately, all of my horticultural and botanical references are now out-of-date, due to these and other changes that have crept in since DNA-supported reclassification has been added to the data set used to assign relationships amongst plants. Though frustrating and annoying, the changes do make biological sense, and in another generation, gardeners will absorb the new names as quickly as we absorbed the old.

Mist flower or hardy ageratum is native to the southeastern states, and is winter-hardy from zones 5 through 11. It is best in a moist woodland situation, where it can be allowed to run and spread as room and environmental conditions permit. In a fertile, overly rich border, it has a tendency to become thuggish and take over more timid neighbors. Its late flowering makes it a welcome addition to the woodland edge.