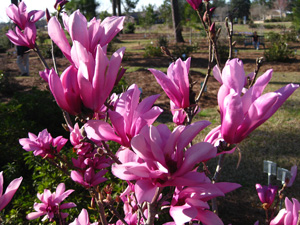 'Ann' is one of the showiest of the Little Girl Magnolias that bloom 7 to 10 days later than most of the deciduous magnolia, thus avoiding many of the late frosts.

The early spring bloomers are favorites of most gardeners because by March we're ready to get winter over and rush headlong into another gardening season. This late winter and early spring season, though, is an unpredictable time when the bright promise of a beautiful spring can be dashed by a late freeze. The Girls - eight magnolia hybrids - were developed specifically to help guard against this kind of gardening calamity.

The eight Little Girl magnolias are all low-branched and shrubby small deciduous trees growing 15 feet tall with spreading or oval forms, depending on the characteristics of the individual clone. Six of the Little Girls - 'Ann', 'Betty', 'Judy', 'Randy', 'Ricki' and 'Susan' - are crosses between Magnolia liliflora 'Nigra' and M. stellata 'Rosea'. 'Jane' was a cross between M. liliflora 'Reflorescens' x M. stellata 'Waterlily'. 'Pinkie' was a cross between 'Reflorescens' x 'Rosea'. The leaves of these clones are 6 to 8 inches long and are produced after the plants bloom. Occasionally, some clones will develop a clear yellow fall color.

The flowers of the hybrids appear later than most of the other deciduous magnolia clones thanks to the late flowering characteristics of the lily magnolia, which blooms two to three weeks later than the star magnolia. The number of petals (tepals) of the lily magnolia parent is usually 6 to 9, while 'Rubra' star magnolia has 16. The blooms of the hybrids usually have 8 to 12 petals with flowers from 4 to 6 inches across. Most of the hybrids have darker coloration towards the base of the flower and fade to a lighter shade of pink towards the apex of the blossom. Some have a slight fragrance.

The Little Girl hybrids are amongst the most common deciduous magnolias offered in the nursery trade, with 'Ann' (deep purple-pink), 'Betty' (pink-purple), 'Susan' (red-purple) and 'Jane' (light pink-purple but not opening widely) being most popular. The original crosses were made in 1955 by U.S. National Arboretum geneticist Dr. Francis de Vos and in 1956 by horticulturist William Kosar. Pollen from the early-flowering star magnolia was saved under refrigeration for crossing with the later flowered lily magnolia. Magnolia breeding is slow work; the first flowers didn't appear for seven years, and it was 15 years before they became generally available.

The Little Girl hybrids are adaptable plants that can be successfully grown from zones 4 through 8. They are small enough in stature to use in the small landscape and are best treated as large bushes instead of small trees. Because they are low branching, they don't form a dominant leader that can easily be pruned into a tree form.

They are best in a fertile garden soil with good drainage. Best flowering is in full sun, although they will tolerate light afternoon shade. Locating spring bloomers on the north side or east side of a home will slow blooming 5 to 7 days, compared to the same plant grown on the south or west side of a home.