Plant of the Week: Magilla Perilla 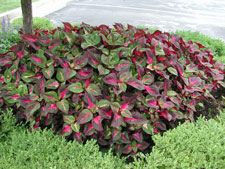 Magilla Perilla, a coleus look-alike, is one of the new plants, first hitting gardens in 2002. Though we live in the information age, it's difficult to find anything concrete about this colorful new plant.

Perilla Magilla, a member of the mint family, is an annual with square stems and opposite leaves marked with shades of purple, pink, green and cream.  The leaves are up to 6 inches long with plants growing at least 2 feet tall and wide in a good location.  Good growing conditions and bright light encourage better color development. This clone lacks the distinctive cinnamon-like foliage fragrance of the commonly seen Perilla.

Magilla Perilla flowers but the blue blossoms are hidden amongst crinkled bract-like leaves at the ends of branches in late summer and fall.  Unlike the weedy Perilla frutescens, this clone appears to be either sterile or a shy seed producer.

Magilla Perilla has a decidedly coleus-like look about it even though its distributor, Ball FloraPlant of Chicago, assures us it's a selection of Perilla.   While Ball FloraPlant is the source of the catchy name, the plant itself was discovered in the collection of a specialist grower in Japan. Miyoshi, a Japanese plant breeding firm, obtained the plant and made marketing arrangements with Ball FloraPlant. Cuttings are grown in Costa Rica.

During the Victorian age purple-leafed, seed grown selections of Perilla frutescens were popular bedding plants but it lost favor as more colorful coleus selections became available.  These are still offered and used in northern gardens where coleus doesn't work as well.

Perilla frutescens initiates flowers under the long day conditions of midsummer and continues to flower and seed the remainder of the year.  It produces copious amounts of seed and can become a persistent weed in the garden.  Magilla Perilla, while it does produce a few flowers, seems to be essentially seed sterile.  Nurserymen propagate the plant by cuttings.

Because it's so shy about flowering when compared to P. frutescens and so vigorous, suggests it's of hybrid origin.  Hybridizing with distantly related species, increasing the chromosome count using mutagenic chemicals, and treatments such as the use of X-ray bombardment to induce mutations all are known to reduce seed production in plants.

Magilla Perilla is the first of the Magilla series with Magilla Vanilla introduced this year. Instead of the predominantly purple tinges of the original introduction, this clone has lime-green leaves with a broad wedge of cream down the center of the leaf.  It's free branching and only about 16 inches tall.

These ornamental perillas are fast-growing heat lovers doing best in fertile, uniformly moist garden soils.  They're well suited for use as container plants with other vigorous, bold leaved plants.  Magilla Perilla will grow in full sun or light shade whereas Magilla Vanilla requires some shade.