Plant of the Week: Lobelia, Edging 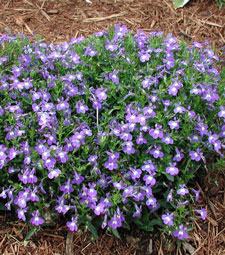 Edging lobelia is one of the plants made famous by the bedding out schemes favored by the Victorians.

Plants are inextricably linked with all facets of human history. Some have profound impact such as wheat, coffee and quinine while others are more ephemeral, reflecting just a mark on the roadmap towards modernity. Trailing blue or edging lobelia, Lobelia erinus, is one of these that tells a story of a time when bedding plants ruled gardens.

Edging lobelia is a trailing annual growing 6 inches tall with clumps spreading 12 to 16 inches across. It has inch-long, linear leaves on slender stems that terminate in a loose cluster of five-petaled blooms.

Individual flowers are one-half- to three-quarters of an inch long with the three lower petals larger than the upper two. The most common cultivars have dark blue or violet flowers, but light blue, white and rose-colored forms are also available. Taxonomists disagree on the plant family for this species. Many considering it a member of the bluebell family while others separate it into its own family, the Lobeliaceae.

Edging lobelia is native to South Africa and was introduced into Holland by 1690, England by 1759 and the United States by 1867. It originated in the Cape Province of South Africa. Lobelias are native throughout much of the world with more than 60 species found in Africa.

This species was grown primarily as a novelty until the bedding craze swept Europe during the early years of Queen Victoria who reigned from 1837 until 1901. The aristocracy adopted elaborate parterre bedding schemes with 10,000 plants used for beds of the minor nobility while those of higher rank could afford displays of 30,000 or 40,000 plants. Beds with strong color contrasts were preferred, especially using primary colors of red, yellow and blue. The favorite blue was the edging lobelia.

These elaborate bedding displays were copied by the emerging middle class during the middle years of the 19th century and usher in the idea of flower gardening to the masses. By the 1870s, large tropical foliage plants (cannas, bananas, castor bean, etc.) with bold foliage began to be used with the flowers. Large containers, often in decorative cast iron urns that are often imitated today, began to appear about the same time. 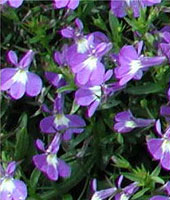 But, beginning about 1990, American garden styles began to change from the more conservative styles of the post-war years to the flamboyant, almost Victorian styles we see today. Containers, mixed hanging baskets and window boxes became increasingly popular and this diminutive lobelia found an audience amongst a new generation of gardeners.

Edging lobelia is at its best in the spring and early summer or areas with cool summer temperatures. It’s grown from seed and should be started about eight weeks before the expected planting date. While it prefers cool temperatures for best growth, it will not tolerate late spring frosts. In areas with hot summers, it’s best located in areas receiving some shade.

Cutting back plants that have stopped blooming will ensure continued bloom in northern areas or, in hotter areas, prepare the plant for resumption of bloom when conditions improve in the fall.

Edging lobelia has little or no drought tolerance but is easy to overwater. It’s best in an organic soil with good drainage. High moisture levels during periods of summer heat often lead to root rot and death of the plant in southern climes.