Plant of the Week: Pineapple Lily 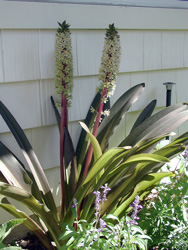 Though pineapple lilies are from South Africa, they are remarkably tolerant of cold weather.

Boring. Thus is the refrain of many gardeners constantly in search of something new for their gardens. One group of plants to gain a lot of attention in the last couple decades and yet still remain relatively uncommon in gardens is the pineapple lilies from South Africa.

Pineapple lilies were long considered to belong to the lily family, but are now split off into the more cohesive subset: the hyacinth family. The 11 species and many forms are all - except one - native to South Africa. Eucomis comosa is the most common form in cultivation and has been used in many of the garden hybrids that are now available in the nursery trade.

What are the characteristics of the pineapple lily?

The common name "pineapple lily" kind of says it all when describing the plant. It grows as a deciduous bulb with broad, linear leaves up to 18 inches long and 2 inches wide, forming a funnel-shaped rosette. Unlike true pineapples, the fleshy Eucomis leaves are neither tough and fibrous, nor armed with marginal spines. Leaves are of various colors with some being a clear green, while others, such as 'Sparkling Burgundy,' 'Tugela Ruby' and 'Oakhurst,' have maroon foliage. One species, E. vandermerwei, has maroon-spotted foliage.

From the rosette of leaves emerges a flower scape growing 18 to 24 inches tall with a mass of one inch, six-petaled flowers encircling the stem. Flower colors range from lime green to white to various shades of maroon and burgundy and, because they are fly-pollinated, may be a bit stinky. Blooms appear in late spring, summer or fall, depending on the species. The flowers produce a mass or round capsules following pollination and remain attractive for several months. At the end of the flowering stem grows a topknot of bract-like leaves just as seen on the top of a pineapple fruit. The scientific name "Eucomis" is taken from a Greek word meaning "beautiful hair," a reference to the topknot of foliage. The epitaph "comosa" is likewise a reference to the crown or topknot of bracts.

What are the origins of the pineapple lily?

Pineapple lilies have been in cultivation in Europe for almost 300 years. Philip Miller (1691-1771) was the chief gardener at the Chelsea Physic Garden in London, where he grew a wide assortment of plants, including Eucomis, from throughout the world. His Gardener's Dictionary was first published in 1731 and became the standard plant reference for over a century. He probably obtained his plants from Dutch sources. Pineapple lilies were well known in this country a century ago, but older references refer to these as frost-tender plants that had to be kept inside to survive the winter. Because most of the learned horticulturists of that era were from the cold New England states, that claim makes sense, but today we know they are reliably hardy to at least zero degrees Fahrenheit.

Pineapple lilies come from the wettest parts of South Africa, including areas that receive abundant summertime rainfall. They occur in grasslands, along stream banks, in forests and even swamps, but not desert regions. Because they have no aversion to summer rainfall, they have proven to be remarkably well-suited to garden cultivation. And, because the summer-wet areas of South Africa are on the high, interior steppe land, most possess considerable tolerance to freezing temperatures.

How do I grow pineapple lilies?

Pineapple lilies can be grown in average garden soil in full sun or moderate shade. They should have an organic-rich soil that has good wintertime drainage. Steve Owens, a nursery friend in central Oklahoma, grows his in full sun, but plants also appear perfectly happy in partial shade. It may take a couple years for the clump to become fully established, but once settled into its location, it is considered trouble-free. They make striking specimens in the mixed border or in bold masses for bedding. Propagation is by division of the clump or by bulblets formed on leaf cuttings made in the summer.