Plant of the Week: Lily, Cobra 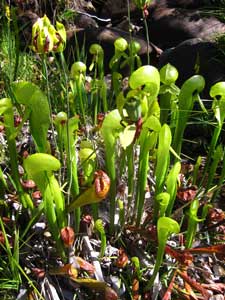 This July, I spent a few days in the Siskiyou Mountains of southwestern Oregon, studying the plants that grow in that region. One of the most intriguing of the many new plants I observed was the insectivorous cobra lily, Darlingtonia californica.

The cobra lily is a member of the American pitcher plant family (Sarraceniaceae), which consists of three genera: the monotypic Darlingtonia of the central Pacific coastal region, the pitcher plants of the genus Sarracenia, native to southeastern states, and Heliamphora, native in northern parts of South America. All are herbaceous perennials of boggy habitats, with highly modified leaves that trap insects to supplement their nutrient supply.

Cobra lily grows about 2 feet tall and in dense stands in freshwater seeps or creek-side bogs. It occurs in scattered stands along the western coast of Oregon and northern California, where it mostly is found at elevations of 3,000 to 6,000 feet. Many of the mountains where Darlingtonia grows have what geologists call serpentine rock formations, producing seeps and runoff water high in heavy metals, including phosphorus, and with a high magnesium concentration and relatively low calcium content. Typically, the calcium concentration is three to five times higher than magnesium, but in streams draining serpentine formations, the ratio is often reversed.

The leaf modification that creates the pitcher for cobra lily nods over at the apex, producing a bulbous hood with two fishtail-like leaves, giving the pitcher a passing resemblance to a cobra poised to strike. The leaves are chartreuse when young, but become maroon-tinged as they age. Where the two modified leaves meet is the downward-facing hole through which insects enter the trap. The top portion of the dome consists of a translucent skylight, so once an insect enters the trap, it buzzes against the skylight and never notices the downward-pointing opening through which it entered. Obviously, the average plant is smarter than the average bug.

The cobra lily is different from all other members of the pitcher plant family in that it has a closed top and does not collect rainwater to create the digestive brew that dissolves the insects. Instead it physiologically pumps water into the trap to keep the fluid at some preferred concentration of ions. The digestion of its prey is done by a combination of internally produced enzymes and the action of bacteria and protozoa.

During the winter, the leaves die back to the roots. In the spring, 30-inch-tall soda straw-sized stems emerge with a large, solitary nodding flower at the end. The flowers are 3 inches across, with five greenish to maroon sepals covering five brownish petals. The flowers remain in place during the growing season as the leaves grow up around them.

Darlingtonia was first collected in 1841 by William D. Brackenridge (1810–1893), a Scottish-born botanist who served on the Vincennes during the United States Exploring Expedition of 1838 to 1842. This ambitious scientific and mapping expedition, one of only two undertaken by the United States government, explored the islands of the South Pacific and, on their way home, the West Coast of North America. Brackenridge made the collection on Mt. Shasta in northern California, near the center of the species’ natural range.

Cobra lily is not as common in cultivation as our native southeastern Sarracenia species, which flourish in the hot, humid conditions of the South. Darlingtonia requires bright sun and cool-to-cold water to bathe its roots — conditions not readily found in the average constructed bog. Though it will survive high daytime temperatures, it prefers cool, mountain nights. Though the species is often found growing in alkaline water, it seems to do equally well in an acidic bog, provided the roots can be kept cool.

Cobra lily is offered in the trade but not with the frequency of the southeastern Sarracenia hybrids. Healthy, reproducing populations occur in its native range, so it is not considered a threatened or endangered species in the wild.