Plant of the Week: Kalanchoe 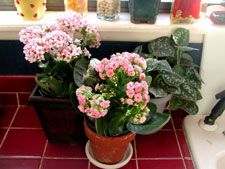 The typical single-flowered kalanchoe has four petals while the new series, the Calandivias, has 32 petals.

Flowering potted plants have mostly fallen from favor in American life. Sure, at Christmas we drag home the mandatory poinsettias, but during most of the year it’s rare to see once-common flowering pot plants such as chrysanthemums, gloxinias or kalanchoes decorating our living spaces.

One of these, the kalanchoe (Kalanchoe blossfeldiana), deserves a second look because it can provide a long period of bloom with very little care.

Kalanchoe is a succulent herb of the jade plant family (Crassulaceae) from Madagascar. It has long-petioled, spatulate, fleshy green leaves with scalloped margins that can be to 5 inches long. Plants produce upright stems and grow to a foot tall.

In the winter, plants are topped by a tight inflorescence bearing hundreds of individual flowers in shades of red, orange, yellow, pink or white. The flowers are four-petaled and ¼-inch across with the base enclosed in a green sheath of sepals. The flowering stems progressively open flowers from the center of the inflorescence to the outer reaches, thus plants remain in bloom for six to eight weeks.

Kalanchoe is one of those plants with a common name derived from the Latin name for this genus. The French botanist Michael Adamsen first used the name kalanchoe in 1763, basing it on a Chinese name for one of the 100 species in the genus. The name has the distinction of being pronounced more ways than about any other plant I know. I learned it as KAL-uhn-cho-a but many favor KA-luhn-cho or the ever-popular KA-luhn-KO-e.

K. blossfeldiana was discovered in Madagascar in 1926 and introduced to Europe about 1930 by Robert Blossfeld, a German plant breeder from Potsdam. His original red introduction appeared 1932 and quickly became popular as a wintertime potted plant. During the 1960s and 70s, breeders developed the extensive array of colors found in the hybrids.

In 2002, a chance find in a Swedish nursery of a multi-petaled kalanchoe lead to a series being marketed under the brand name of Calandiva. Instead of the normal compliment of four petals, the new hybrids have 32 petals arranged in tight rosettes like miniature roses. They’re now available in all of the colors found in the species.

Kalanchoes are short day plants that bloom naturally during January and February. By manipulating the length of the day and night, growers can now flower these plants at any time of the year.

In the home, kalanchoes are probably the easiest to care for flowering pot plant. Because they’re succulents, they have considerable drought tolerance and will show little sign of upset if you miss a watering or two.

Give them good light and water on a weekly basis and you should have good blooms for as long as eight weeks. After the plant has finished flowering, it can be kept as a houseplant, and should you have a bright window away from stray light during the winter, don’t be surprised if it blooms again next winter.