Plant of the Week: Juniper, Common 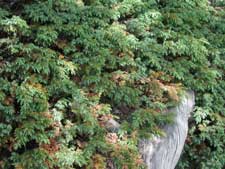 Common juniper is the world's most widely distributed tree, occurring in cold and mountainous regions of all continents in the Northern Hemisphere.

That plants move around is hardly a surprise.  Continents and plants have always moved about and continue to do so, so efforts to stop this migration will always be an uphill battle.

In this vein, let us consider the movement of the common juniper, Juniperus communis.

This juniper is the widest ranging of all woody tree species having what botanists describe as circumpolar distribution.  It occurs in Siberia, across Canada to where the tundra starts and down the spine of the Rockies as far south as Arizona and the Appalachians to South Carolina.   It's one of Greenland's few trees and extends on through much of northern Europe, into Central Asia and mountainous places in China.

Throughout its worldwide distribution there is much variation in form, but usually it has a bush-like habit allowing it to survive being buried under many feet of snow during the winter.  Upright forms do occur with 200-year-old specimens reaching as much as 20-feet tall.  It's a plant preferring chilly places, being cold hardy to minus 40 degrees.

The quarter-inch-long, prickly needles are gray-green above and greenish beneath.  Needles occur in tufts at the end of branchlets producing a distinctive look.

The blue, turning black berry takes up to three years to reach maturity.  Berries are aromatic and have been used medicinally and still are, if one considers a shot of gin medicinal.  The name for this spirit comes from the French word genievre, which is their name for the tree.  Berries are used to add flavor to the drink.

Common juniper is one of over 500 species with circumpolar distribution.  This distribution is a relatively recent thing - at least geologically speaking - only taking shape since the last ice sheets began withdrawing about 12,000 years ago.  As the ice sheets advanced south, this juniper hop-scotched ahead of the glacier, probably extending as far south as the Ouachitas.  As the glaciers receded it retreated to the cool mountain tops and the northern reaches of the continents.

I again met this juniper a couple weeks ago atop the Ruby Mountains in northern Nevada, which fittingly drains into the Humboldt River.  This river, named by General John Fremont in the 1840s as he sought routes through the mountains to California, honors the father of plant geography, Alexander von Humboldt (1769 - 1859).

Humboldt never visited western America, but his exploits in the Andes in South America made an impression on many North American explorers who were active in the field soon after tales of his travels were published.   His name is commemorated in over 20 places in the western states.

Many cultivars of common juniper are available in the nursery trade, ranging from the 5-foot-tall, pencil-shaped 'Compacta' to trailing forms such as 'Aurea', a golden-leafed form.  They will grow in the heat and humidity of the South, but stem diseases such as juniper blight are problematic.  Give them a bright, well drained soil with good air circulation for best results.