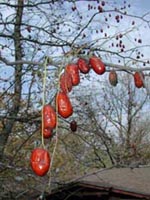 The secretaries have learned over the years to be cautious when I get a box in the mail. Some mighty unusual and sometimes smelly things periodically arrive that way.

One of the more benign specimens I usually receive every fall are a few samples of 2-inch long oblong, wrinkled, brown fruit. These fruit belong to the Jujube (Ziziphus jujube), a deciduous, 25-foot tall fruit tree from northern China reported to be one of the most popular fruits of that land.

Jujube fruit are edible either fresh, dried or preserved in sugar or honey syrups. Fresh, the fruit reminds me of a sweet, crunchy Styrofoam cup but others, who are either more charitable or who have more keenly developed taste buds, describe the taste as sweet and nutty. Jujube fruit contain 20 to 22 percent sugar, but only 70 percent moisture, as compared to the 90 to 95 percent moisture of most fruit species.

Most selections of jujube are upright growing with twiggy branches and pairs of short spines on the older stems. The glossy green leaves have a short petiole and are 2-inches long with tree prominent veins extending from the base of the leaf to the tip. Small, white five-petaled flowers appear in May and continue to be produced for four to five weeks. Best fruit set occurs when the plants are cross pollinated, but some selections are self fruitful and do not require cross pollination.

The jujube is a member of the Rhamnaceae - the buckthorn family.

Jujube, according to legend, is native to Syria and was introduced into Europe during the reign of Caesar. However, I find no mention of this species in the recently published flora of that region. Probably the plant was introduced to Europe from China by means of the Silk Road during the early years of the Christian era.

The small fruited European selections were introduced into the United States in 1837 by Robert Chisholm. But it was Frank Meyer (1875-1918), the famous USDA plant explorer, who also brought us zoysia grass lawns and Bradford pear, who introduced the large fruited types from China to California. The fruit has never gained much popularity in the United States, and today, is only grown by backyard gardeners.

The jujube is hardy throughout Arkansas and will survive as far north as St. Louis, but there the fruit often do not mature before first frost.

Plants tolerate extremely droughty sites and very poor soils, making them ideal for the gardener who wants fruit but doesn’t want to put a lot of effort into the job. Being relatively slow growing, the tree does not require pruning as with other fruit species.

The jujube is bothered by no serious insect or disease problems. The tree makes an unusual specimen tree in the landscape and is a real focal point for conversation when in fruit.