Plant of the Week: Zelkova, Japanese 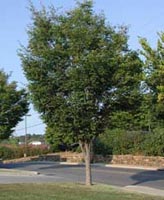 At five years after planting, this Village Green Zelkova is showing the characteristic vase-shaped habit of growth.

At weak moments, I long for extra space in my garden so I can plant more trees. Especially really big trees like the Japanese Zelkova ( Z. serrata ). But being landlocked and unlikely to acquire either more space or energy, I will content myself to admire the trees growing in my part of the state.

The Japanese zelkova grows 80 feet tall and wide in a classic vase shape, the same shape as a mature American elm. Because zelkova has a similar size and shape to the American elm but is resistant to Dutch elm disease, it has been recommended as a replacement for our disease ravaged native tree.

The largest zelkova I know and almost certainly the largest in Arkansas is a massive tree on the Agricultural Experiment Station in Fayetteville directly behind the Food Science Building . I've never been able to learn when it was planted, but I suspect it dates back to the 1920s or 30s. It was allowed to branch from the ground, so it has multiple trunks with a basal circumference of more than 20 feet. The largest limbs are themselves 18 inches through.

Zelkova belongs to the elm family and has leaves with the general appearance of small-leafed elm. The big tree at the research farm has a rusty yellow look in the fall, but some of the selected forms such as ‘Village Green' or ‘Spring Grove,' have wine-red fall color. The flowers are insignificant.

Japanese zelkova made its way to this country in 1862 when Dr. Robert Hall, a medical doctor turned trader, shipped in six Wardian cases aboard a steamer directly from Japan . This occasion marked a turning point in American horticulture because prior to this shipment, all Asian plants came via way of Europe and their climate and sensibilities influenced what was considered "garden worthy."

In addition to Zelkova, Hall's shipment included 10 kinds of Chamaecyparis, a number of Japanese maple selections, several magnolias and several other plants that went on to become important garden plants. Unfortunately, he also brought cuttings of Japanese honeysuckle that has so effectively invaded our woodlands.

Here in Fayetteville , Village Green zelkova -- a selection made by Princeton Nurseries in New Jersey in the 1960's -- has proven well suited to our growing conditions. The Fayetteville planting by the Walton Arts Center has been fast growing, tough and adaptable. It has averaged about a foot of growth a year. Zelkova is well adapted to either acidic or alkaline soil conditions and appears to grow successfully in the South. It has excellent drought tolerance once established.

Finding zelkovas at your local garden center is not always easy. One source is an interesting little mail-order nursery called Arborvillage in Holt , Mo. , about 30 miles north of Kansas City . The nursery is run by the Rawdon family and could be used as a case study for what happens when a love of trees becomes an obsession. While they only offer small starter-size trees, the breadth of their collection is impressive. They offer six kinds of zelkovas. They can be found on the web at www.arborvillagellc.com/.