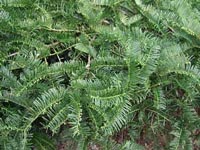 On my desk, sits this year’s pile of garden catalogs. I don’t know a gardener who doesn’t look forward to their arrival each winter and then spend hours pouring over them in contemplation of what they would like to order for their dream garden.

Catalogs, the silent salesman of the mail order world, represent a valuable textbook in our horticultural education. Like all textbooks, some do a better job than others.

The plum yew is a coniferous evergreen that grows as a small tree or spreading shrub, depending on the selection. Mine, a selection called "Duke Gardens," grows as a spreader capable of reaching 3 feet high and 5 feet across.

The lustrous, dark green needles of plum yew are an inch and a half long and arranged in a "v" shaped trough on the branches. The flowers are insignificant, but old plants can produce a plum-sized fruit which turns brown at maturity.

This year’s Wayside catalog does not list Cephalotaxus, probably because of unavailability of supply or poor sales during the years it was listed. Just like the blue-light special at K-Mart, better get them while they last. Such appearances and disappearances from catalog listings are common and reflect one of the roles of mail order nurseries - introducing new plants to the masses.

Wayside Gardens was started in Ohio in 1920 by Elmer H. Schultz and Jan Jacobus "Jack" Grullemans (1890-1965), the latter being the marketing genius behind the firm ’s success. Originally, they marketed bulbs from relatives in Holland, but by 1935, the nursery began offering perennials and new woody shrubs. In 1975, the firm was purchased by Park Seed Co. and moved to South Carolina.

As a dedicated pack rat, I’ve managed to amass an almost complete set of Wayside catalogs back to the depression era and find their pages a good barometer of the ebb and flow of plant fashion during the 20th century. Their catalogs are well illustrated and probably have taught more gardeners about perennials than any garden book ever printed.

Wayside Gardens has carved a niche at the top of the heap of the 650 firms that market plants via conventional printed catalogs. Wayside prints six catalogs a year and sends out in excess of two million copies of their main spring catalog, making it one of the hand full of high circulation mail order nurseries.

Catalog sales is a percentages game. High circulation catalogs such as Wayside cost about $2 to print and ship while garnering a return rate believed to be less than 5 percent..

All successful firms must cover their overhead costs, so the prices they charge reflects the strategy taken to reach the customer. The Internet is having a significant impact on mail order sales because firms can deliver their message to potential customers and bypass the expense of a printed catalog. About 1,800 firms are marketing plants online.

But, back to our plum yew. This evergreen is considered the taxus for southern gardeners. It tolerates summer heat well, but unlike the yews of northern gardens, plum yew is very slow growing.

Plum yew grows in full sun or moderate shade. It tolerates drought but grows a bit faster if given a good soil and water during dry spells. Like all conifers, avoid poorly drained site.