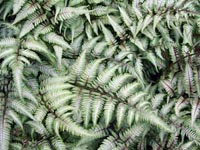 Ferns make a shade garden. Their delicate, wispy fronds cool the mind almost as effectively as the air conditioner cools the body. And of the ferns, the favorite woodland fern of most gardeners is the beautiful silvery-white Japanese painted fern (Athyrium nipponicum pictum).

The Japanese painted fern is a hardy, deciduous fern that grows to 18-inches tall and wide. The fronds are twice compound with the blades silvery-white and suffused with green. The stem of the frond (the rachis) is red or purple, giving a delightful blend of colors that give rise to the common name.

I find no reference as to when the Japanese painted fern was introduced into our gardens, but it was probably one of the innumerable new plants Victorian gardeners introduced during the middle of the 19th century.

During the height of the Victorian period, ferns became popular in parlors and in gardens. In parlors, ferns were encased under glass bell jars or sometimes used as part of elaborate table decorations. A non-green fern such as the Japanese painted fern must have caused quite a stir when it was introduced.

A few years ago, I became a bit more acquainted with this fern than intended, thanks to some unused space on my Visa card. At a nursery trade show, I came across a fern supplier selling all manner of fern liners - small fern starts that had been grown in tissue culture. Individually, the price was low, but because I had to buy them by the flat and because enough flats had to be purchased to fill a case, I soon found myself the proud owner of more ferns than I knew what to do with and no longer bothered by pesky space on my Visa card.

The Japanese painted fern quickly proved to be my favorite. Painted ferns that were planted away from the sprinklers and into clayey soil on my dry hillside are about the same size today as they were a decade ago. Plants that were planted into well-amended soils with ample organic matter and irrigation have grown well and make an attractive foot-tall groundcover bed that shines in the shade.

But the painted ferns that have done the best are some planted in a bed filled with old potting soil. This bed receives sun from noon to 4 p.m. but is far enough from the trees that there is no root competition. These plants are nearly 2-feet tall and wide. They are so happy in this site that new sporelings are popping up at the margins of the planting. Japanese painted fern is not normally adapted to sunny sites, but because this bed is uniformly moist, they seem to tolerate the midsummer sun without a fuss.

Of the dozen or so ferns I have grown from spores, the Japanese painted fern has proven to be the easiest species to work with. Growing ferns from spores takes lots of patience but little actual work. I collect spores from the standing fronds in the garden sometime in November. After drying the fronds for a week or two in an envelope, the dust size spores can be easily harvested by gently tapping the fronds on a piece of white paper. Fill a new plastic pot with fresh, moist potting soil and then dust the spores across the surface of the soil. Seal the pot inside a plastic bag and place it on a warm windowsill where it gets good light but not direct sun. Then wait.

In about 10 weeks, a green algae-like film should begin growing across the surface of the pot. In another couple months, some of this green mat will begin to develop small ear-shaped structures called prothali. Up until this stage it's best to keep the pot sealed in its plastic bag and maintain moisture and humidity near 100 percent.

After another couple months, these prothali will produce small fronds and the plastic should be removed in stages to acclimate the new plants to the real world environment. When the first fronds begin forming the individual plants can be teased apart and transplanted into bedding plant trays.

In another three to four months, the plants will be large enough to transplant into a larger container prior to moving to the garden.