Plant of the Week: Japanese Aster 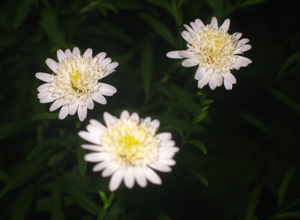 Thumbing through the newly restructured fall 2011 Wayside Gardens catalog last evening, I spotted a plant they had marked as new with a bright red star. Though the plant was new to them, I had grown it for more than a decade, but – as so often happens – I had lost the tag and didn’t know what it was. John Elsley at Wayside listed the plant as Asteromea mongolica, but as I found in researching it, a better name is Kalimeris pinnatifica. I’m sure I bought the plant under the name used by Wayside Gardens because I’m a sucker for anything with an exotic place name.

My inability to identify the plant growing in my garden is excusable – though losing the tag is not – because Kalimeris pinnatifica is a member of the confoundingly complicated daisy family. Identifying members of this overly large family is the realm of specialists and mystics, and mere gardeners dare not enter the realm.

Japanese aster is the common name often associated with this plant, for it does have aster-like characteristics and is native to northern Japan, not Mongolia. The genus consists of eight species native in northeastern Asia from the grasslands of Mongolia, through Manchuria and Korea, eastern Siberia and the northern two islands of Japan. Kalimeris pinnatifica seems to be the only species in cultivation.

This species is a slowly spreading rhizomatous herb growing about 2 feet tall, with an open and airy habit. Leaves on the basal branches are pinnately cut and 2 to 3 inches long. Upper leaves on flowering stems are an inch long, simple, unlobed and 10 times as long as they are wide.

The white, inch-wide flowers are borne singly atop the slender stem. A single row of ray florets surround a central cushion of tubular disk florets, which are also white but tinged with a creamy yellow tone. Plants begin flowering in late spring and continue producing blooms until frost. Because the plant has an open habit, it never produces a mass of flowers at any one time but seems to always be in bloom during the summer months. The plant in cultivation is surely a garden selection with the “anemone-like” cushion of disk florets, instead of the short, yellow disk flowers of the other species of Kalimeris.

I am not the only one who has had trouble placing a name on this plant. The genus was first described in 1826 from a garden-grown plant, but placed as a section of the genus Aster under the name Kalimeris. The next year, another botanist identified a different species but used the genus name Asteromea. Later generations of botanists moved the plants to the American species Boltonia, which it superficially resembles, but from which it differs significantly in the technical details used to separate members of the daisy family. The latest botanical revision of the genus in the 1990s assigns the plants to the genus Kalimeris, because the first name published has precedence.

I have grown my Japanese aster in the shade garden under the high canopy of my oaks. In its native range, it often occurs in open woods or in full sun in disturbed sites. It will undoubtedly be more compact and free-flowering in more sun, but is unusual in that few members of the daisy family actually bloom much in the shade. References indicate it will tolerate moist conditions, but for me it has done fine in fairly droughty locations. It is not vigorous enough to compete with our native asters. Plants are hardy from zones 4 through 8.

For me, it has been a middling kind of plant. I like Japanese aster because it has persisted without fuss or bother and blooms dependably each year, but it is not flashy enough to garner much attention. It is not invasive and likely to take over the border, so it would be an ideal “weaver” plant, serving as a unifying thread in a supporting role for flashier plants in the border. Because it is always in bloom, it has potential as a filler flower for summer flower arrangements.