Plant of the Week: Japanese Anemone 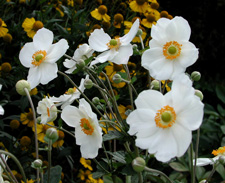 Japanese Anemones such as this old clone called ‘Honorine Jobert’ are excellent fall flowering additions to the perennial border.

The bloom display in our gardens ebb and flow in an ever changing rhythm. Fall is largely given over to members of the daisy family - asters, chrysanthemums and the like - but there are other garden gems making their presence known during this wonderful year. One of these is the Japanese anemone.

Japanese anemones are 2 to 4 feet tall, open and somewhat sprawling perennials. The deep green, deeply notched trifoliate leaves are basal with the much-branched and many-flowered stems held above the foliage.

Japanese anemones are members of the Ranunculus family with flowers borne in clusters at the ends of the branches. The pink or white blooms are 2 to 3 inches across and appear in late summer and early fall. Single and double-flowered forms are available.

Anemone flowers lack true petals with the showy portion of the bloom being the sepals. The ring of yellow stamens surrounding a conspicuous, green button-like array of stigmas is an easy to spot characteristic of this plant.

Japanese anemones were described and named by Carl Thunberg in his 1784 Flora Japonica from dried specimens collected there while serving as a doctor for the Dutch East Indies Company. However, it was not until 1844 that live material was introduced to England by Robert Fortune, the plant explorer sent out by the Royal Horticultural Society.

Shortly after its introduction to England the plant then known as Anemone japonica was crossed with a Nepalese species called A. vitifolia, giving rise to the hybrids we now grow. We now know that the Japanese anemone is really native to China and probably introduced to Japan during the Tang dynasty. The original plant is now called A. hupehensis with the hybrids called A. x hybrida.

One of the best and most popular of the Japanese anemones is the large, white-flowered clone called ‘Honorine Jobert.’ It was found by a French nurseryman in the 1850s arising as a root mutation from the original hybrid. Mr. Jobert named it after his daughter Honorine.

Japanese anemones need a deep, rich, loamy, uniformly moist soil to do their best. They’re probably best grown in areas receiving morning sun and afternoon shade where they’re protected from strong drying winds. The east side of the house would be an ideal location. They also grow in medium shade under a high canopy of trees.

Japanese anemones have poor drought tolerance but are equally sensitive to winter-wet conditions. I have found them slow to establish, but once happy in a location they will be long-lived, carefree and spread.