Plant of the Week: Jade Plant 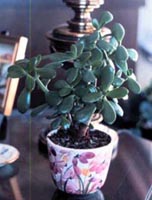 We humans are a sentimental lot and often form emotional attachments with our plants.

Sometimes these attachments are the result of a milestone event -- a birth or passing of a loved one -- or maybe a keepsake from a close friend. But, for these attachments to really get strong, the plant in question has to have sticking power. It must be a plant that just won’t die. The jade plant - even though it is just a lowly houseplant -- is such a plant.

Our jade plant is from my father-in-law’s funeral and is a mere sapling at 10 years of age. Frequently, you hear stories of jade plants 100 or more years old. The jade plant is a member of the Crassulaceae family and related to sedums and many kinds of succulent plants. It is originally from the Capetown region of South Africa and was one of the early plants -- along with geraniums -- introduced to Europe by Dutch settlers.

In its native habitat the jade plant will grow to 10 feet tall with leg-like branches and a torso size trunk. Its succulent jade-green leaves are oval and as thick as a quarter of an inch.

The jade plant does flower in Southern California where it is sometimes used as a hedge, but seldom do blooms show themselves when grown as a houseplant. The blooms are white, star-shaped affairs which grow to a half inch across and are borne in dense clusters at the top of the plant.

Jade plants are desert plants and have evolved several strategies to tolerate extended droughts. Their very succulence is the main means of combating drought, but they also have other tricks up their sleeve. Jade plant -- and as later learned -- many other kinds of plants adapted to drought conditions have adapted a unique way of photosynthesis that helps conserve water. This is called CAM photosynthesis.

CAM, an abbreviation for crassulacean acid metabolism, permits the jade plant to open its stomata (small pores on the leaves through which gas exchange occurs) at night and absorb the carbon dioxide it needs for growth during the dark hours. The carbon dioxide is temporarily stored as malic acid in the succulent leaves. When the sun arrives in the morning, the stomata close to prevent water loss and the plant then converts the stored carbon dioxide into sugar using the energy of the sun.

Though not completely indestructible, it is hard to kill a jade plant. They are slow growing and can readily be dwarfed by keeping them in small pots. But if you want it to grow, it responds well to regular watering and fertilization during the summer months. A good strategy for maintaining the plant is to move it outside in the summer to the patio where it will tolerate either full sun or full shade. In the home in the winter it should be watered less often and receive fertilizer only if in a bright location. It will tolerate poor light conditions during the winter without flinching.

The most common problem of jade plant is mealybugs -- a white mass of cottony froth that attaches itself at the juncture of the leaf and stem. An easy way to control an outbreak is by using cotton swabs and rubbing alcohol and going after the pests one at a time.

Another ailment, though certainly less common, is sudden limb breakage. In this unusual malady a major limb falls from the plant without warning. Several stem rotting diseases can cause the problem and is usually a sign of overwatering.