Plant of the Week: Ice Plant 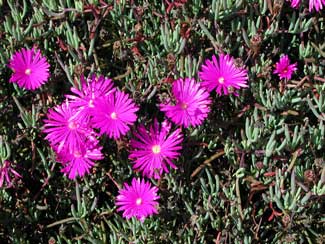 Summer heat is upon us and anything that stands up to the abuse and insult of an Arkansas summer must be celebrated. Ice plant (Delosperma cooperi) is one such plant that not only has a cooling name, it loves the heat and produces an array of iridescent blooms that attract attention all summer long.

Ice plants are a group of about 180 species of mostly southeastern African succulent perennials belonging to the interesting Aizoaceae family. Species are found in the summer rainfall areas of the continent from the seacoast to the tops of forested mountains. Plants range in size from small clumpers to erect growers a foot or more tall, but most are prostrate creepers to a couple inches tall with succulent leaves. Some species (but not the winter hardy species) excrete calcium crystals on their leaves that give the plants the look of a heavy frost, hence the common name.

D. cooperi is the most commonly grown species of the genus and is used as the source for winter hardiness in the many hybrid ice plants that are now being introduced. This species has prostrate to decumbent stems that creep along the ground with the ends of the branches reaching 4 to 6 inches tall.  Leaves are to 1.5 inches long, cylindrical, grayish in color with a flattened upper surface and marked with gray-green pimples.

Ice plant flowers are to 2 inches across and at first glance have the appearance of that of a daisy. There are a number of narrow ray florets radiating out from a central mass of yellow stamens. Flowers of the hardy kinds are borne singly and produced over a long season from late spring and through much of the summer. They close at dusk and open with the heat of the day. D. cooperi has pink to lavender flowers while other species have white, red, coppery or yellow blossoms. Hybrids have a host of flower colors, often with the blossom itself bicolored with the center of the flower white.

Cooper’s ice plant was first collected by Thomas Cooper (1815 – 1913), a plant collector sent to South Africa in 1859 by a wealthy English insurance broker and succulent collector W. W. Saunders.  Cooper collected in the Zulu country and in the Drakensberg Mountains, sending back a number of species new to science.  He has at least 20 species named in his honor.

But our modern awareness of ice plants outside of California came from Panayoti Kelaidis, the plant guru of the Denver Botanical Garden who began traveling to South Africa in the 1980s and bringing back hardy succulents for the world class rock garden he was creating in the mile high city.  Most of the ice plants now in the perennial nursery trade in the United States came from his introductions.

In their native habitat most ice plants are native to summer rainfall grassland sites but they lack the competitiveness to outgrow aggressive grasses during the rainy seasons so they mostly are found in rocky outcrops or sites with soil conditions unsuitable for vigorous grass growth. Many species, such as D. cooperi, have fleshy roots that allow the plants to bounce back quickly after a rangeland fire.

Ice plants are easy to grow in a sunny rock garden site, but keeping them alive over winter is another matter. They are perfectly winter hardy, surviving winter temperatures as low as minus 20 degrees Fahrenheit, but winter-wet conditions are not to their liking. In cold, but low rainfall areas such as Denver, ice plant thrives in a normally well-drained rock garden site. However, in Arkansas it is hard to keep them through the winter. Constructing a super lean, fast draining soil should work to keep the plants alive during the winter, but to get the plants to grow in our summer heat more water may be needed than you would think necessary for this drought tolerant species.