Plant of the Week: Hyacinth Bean 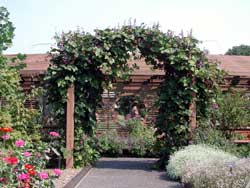 The hyacinth bean is one of those plants I see around, but because I have neither a really big trellis nor a chain-link fence to cover, I’ve never grown it. But if you have the right location and something ugly to cover, this fast-growing bean makes an impressive show in the garden.

Hyacinth bean (Lablab purpureus also sometimes called Dolichos lablab) is a perennial bean from tropical Africa that is an important food crop in parts of that continent and much of Asia, especially India. The mature, dried beans contain cacogenic glycosides and are poisonous but boiling the seeds in two changes of water renders them edible. The young, tender bean pods are most often eaten; in some areas the foliage is consumed as greens similar to spinach.

But we take slowly to new foods in this country, so here Lablab is mainly grown as an ornamental. The fast growing vines can reach 20 feet in a single season with trifoliate leaves triangular in outline and 6 inches wide and long. Vines climb by twining around a support. The purple-leafed form is most often grown in gardens but green-leafed selections are available.

During the summer and early fall, hyacinth bean produces an abundance of purple or white pea flowers on 6-inch long peduncles. Flowers are followed by shining purplish-iridescent fat bean pods that grow to 2 ½ inches long. It takes about 90 days from planting until the first pods are produced. Because the plant is a vigorous vine it continues to flower throughout the summer as long as conditions are favorable.

Hyacinth bean is a hot weather plant that does especially well in the South. Its roots will survive over winter in zone 8 if plants are well mulched but mostly the vine is grown as an annual. In colder areas, seeds are started indoors about six weeks before the expected last frost date. In milder parts of the country seeds can be planted directly in the garden where they will grow. For faster germination, soak the seeds in water for a few hours before planting.

Lablab should be grown in full sun in a rich, well-drained soil. It’s a nitrogen fixer so once nodulation occurs, plants grow rapidly. Few pests bother this tough, easy-to-grow plant. Seeds can be saved from the crop in the fall for planting in future years.