Plant of the Week: Red-Leafed Hibiscus 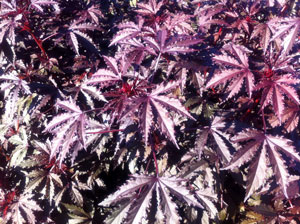 The summer of 2011 was brutal across the central part of the nation, with severe drought and record-breaking temperatures. Many plants, even those considered tough and long-established, perished or suffered severely during the punishing conditions. But a few, such as the red-leafed hibiscus (Hibiscus acetosella), actually thrived during the swelter.

Red-leafed hibiscus is one of the several hundred species of hibiscus found in tropical areas around the world. This family includes annuals such as okra, perennials, shrubs and trees. In its native Angola, Hibiscus acetosella grows as an herbaceous perennial found along roadsides and in the clearings around native habitation. In gardens, it is grown as an annual and can grow 6 to 10 feet tall in its first year. Unless pinched or cut back during the early part of summer, the plant will have one dominant stem, but if pruned back a time or two, it will take on an upright oval form and maintain more gardenesque proportions.

The leaves are the size of a child’s hand and deeply cut, somewhat resembling those of a Japanese maple. Leaf color is typically some shade of red or maroon. Red Shield and Jungle Red have leaves that are more red-tinged, while the 2012 release from PanAmerican Seeds, called Mahogany Splendor, has more maroon leaves.

Red-leafed hibiscus is winter-flowering, with blooms appearing in November and December in mild climates. It produces typical five-petaled hibiscus-like flowers that individually remain open only one day, but the plant will remain in bloom for several weeks. Flowers are 3 to 4 inches across and in shades of pink and maroon with darker veinal markings. Most gardeners in temperate regions will never see the blooms unless the plant is moved into a greenhouse over the winter.

This species was recognized as a distinct plant and given its current name in 1896 by French botanists. The Latin epitaph is from an old name for sorrel (Oxalis) because the foliage of this hibiscus is somewhat sour to the taste. It was found growing around African villages, where it was cultivated and eaten as a spinach-like green. It can also be eaten in mixed salads.

Red-leafed hibiscus is a big plant best suited for use as a specimen in the mixed border or as a tall background plant. It can also be used as a container plant, but because it grows so large, use it by itself or only with other fast-growing plants. It can be grown from seeds, the usual method for most greenhouse growers, but cuttings also root easily. Seed germination occurs in 3 to 4 days if seeds are kept uniformly moist and the soil temperature is in the 70- to 75-degree range. Light is not required for germination.

Because it is a tropical hibiscus, it should have at least six hours of direct sunlight, and the soil should be warm before planting. Plants have good drought tolerance once established, but for more luxurious growth and more attractive foliage, providing uniform moisture during the growing season produces the most attractive plants. Plants will overwinter south of zone 9, where they can be treated as a perennial.

Red-leafed hibiscus is a plant familiar to many gardeners in Florida, south Texas and California, but will become more widely grown in the next year or two as greenhouse producers throughout the nation produce it for the summer foliage market.