Plant of the Week: Hercules Clubs 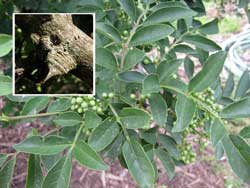 Hercules club is an unusual Arkansas deciduous native tree found in the southern half of the state. (Photo courtesy Gerald Klingaman)

We live in a mobile world where trips to far-flung corners of the globe are commonplace. When a gardener travels, it is always fun to look for familiar plants among the flora of distant lands. Most of the plants of the northern hemisphere, if they have related species in Asia or Europe, are confined to the northern latitudes. But a few, such as the toothache tree (Xanthoxylum sp.), have a pan-tropical distribution and can be found in either hemisphere.

The toothache trees consist of about 200 species of small trees or large woody shrubs scattered about subtropical regions of the world. Most species are found in Asia, the Caribbean, parts of South America and even Hawaii. Their tropical nature is illustrated by their membership in the citrus family.

In the United States two species are most common, X. clava-herculis, Hercules club, a more southern species and X. americana, the common toothache tree or tingletongue which is found scattered in all of the eastern states as far north as Canada.

These small deciduous trees are usually less than 25 feet tall with stout, low-branched trunks. Young branches are armed with slender, black locust-like thorns that get larger and stouter as the trunk enlarges. In old age these thorns disappear, leaving behind a knobby, gnarled trunk.

These two species are never common but instead occur widely scattered through their native range. Both species may be found growing in old fence rows or in moist, but open ground away from larger trees.

The leathery, foot long leaves are compound with 7 to 13 leaflets. When crushed they give off a citrusy smell. Tiny yellowish flowers are produced at the ends of branches in the spring in an open cluster. Pea size green berries turn reddish-brown as they ripen in the fall.

All parts of Hercules club and toothache tree contain an alkaloid called xanthoxylin that causes a tingling sensation when chewed. Because of this it was used in pre-dentistry days as a home-cure for toothaches. In Japan a pepper-like condiment is prepared from the mature seeds of a species that grows there. In China the seeds of one of their native species are being considered as a source of a diesel-like biofuel.

Toothache tree is hardy as far north as zone 4 while Hercules club is hardy only to zone 6. Both will grow as far south as the Gulf of Mexico. They grow best in a moderately moist and fertile site receiving full sunlight. These two native trees are novelty trees with a gnarled, picturesque character that makes them ideally suited for use as an unusual specimen. A bit of selective pruning is often needed to accentuate this picturesque form. Toothache tree and Hercules club are not commonly offered in the nursery trade but firms specializing in native woody plants usually offer them for sale.