Plant of the Week: Hen-and-chicks 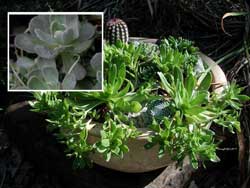 These two hen-and-chicks relatives from Asia are interesting additions to the rock garden. (Cooperative Extension Service photo by Gerald Klingaman)

That succulent plants survive drought is well known, but some also survive winter cold. Sedums and hens-and-chicks (Sempervivum) are the most common examples of winter-hardy succulents but there are others. An interesting but still little known group of hardy succulents with hen-and-chick-like characteristics are the Orostachys from the mountains of northern Asia.

Thirteen species of Orostachys are described in the mountainous regions of Japan, north China, Mongolia and adjacent areas of Siberia. They belong to the Crassula family, the same group as the hens-and-chicks.

Though still rare in cultivation here, the most common Orostachys seem to be O. malacophylla, a green-leafed succulent, and O. iwarenge, a gray-leafed species. These botanical wildlings have not been in cultivation long enough to acquire common names.

Orostachys malacophylla is a trailing perennial with soda straw-sized branches spreading across the soil surface. At the ends of these 6-inch long leafy stolons a rosette of green leaves 2- to 4-inches in diameter is produced. The leaves are oblong in outline with the rosette more open and with fewer leaves than the true hen-and-chicks, but with the same general look. In the winter the large outer leaves shrivel and form a marble-sized fuzzy ball at the ends of the branches protecting the youngest, still green leaves inside.

I have grown this species for about six years, and thus far it has not flowered. However if blooms are produced, they appear in mid-summer and arise from the end of the rosette as a finger-like spike of star-shaped, greenish-white flowers. Whenever a rosette flowers, it dies, leaving behind the smaller, less mature rosettes to carry on the growth of the clump.

Orostachys iwarenge is built on a similar pattern as the above species, but is waxy gray throughout and much more delicate looking. It too produces stolons, but in this species they are the size of cotton wrapping string and produced in much more abundance. The plant makes a kind of jumble of shoots as the clump expands. It is faster growing than O. malacophylla but is less likely to overwinter for me.

The hen-and-chick structure of these plants seems to be the Asian counterpart to the European Sempervivums (hen-and-chicks) and the freeze intolerant Echeverias of Mexico. All are built as fleshy rosettes that grow in barren rocky wastes, thus attesting to an ancient kinship dating back to the period before the super continents were torn apart.

The green Orostachys is easy to grow in containers, provided a well-drained, gritty potting soil is used. The roots are extremely winter hardy and, if the soil is not overly moist during the winter, will survive temperatures approaching, and maybe exceeding, zero. In the summer, give the plants full sun and water as you would any other container plant. I have had better long-term success with this species than I have the more common hens-and-chicks.

The gray Orostachys is more finicky and seems both more sensitive to winter-wet conditions and is not as winter hardy. It is easy to keep over winter in a cold greenhouse or I have successfully overwintered it in a dry sand bed in my rock garden. These small plants are interesting additions to the rock garden or can be used in dish garden plantings that are left outside all winter. Propagation is easy by summertime division.