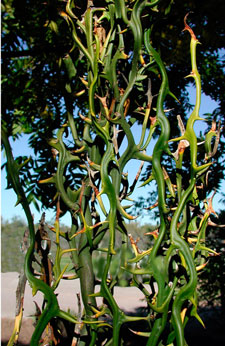 Certain plants are brought in again and again for identification.  Such plants share two characteristics; first they are not part of the normal commerce of horticulture so are unknown by most gardeners and, secondly, they have some unique characteristic that arouses enough curiosity to spur someone to action.

One of the plants I’m frequently asked about in the fall is the hardy orange, Poncirus trifoliata.

Hardy orange, closely related to the true citrus and belonging to the same family (Rutaceae), is a small, much-branched deciduous tree growing 15 to 20 feet tall and wide.  It usually has multiple branches with an impossibly tangled crown of thorn-laden branches.  The young branches are green with stout, incredibly sharp 2-inch long spines.

As the Latin name tells us, the 2-inch, shiny green, alternate leaves come with three leaflets.  In the spring white, slightly citrus-scented flowers appear in early May.  By midsummer, green, golf-ball sized fruit adorn the tree. When the leaves drop in the fall, these fruit turn yellow and hang on the tree.  It’s this feature that attracts most attention and often prompts people to ask for identification.

Are there any uses for the fruit?

The fruit, though fragrant and citrusy, contain little pulp but instead are chock full of seeds. What pulp is produced is exceedingly sour.  Don Shadow, a nurseryman in Tennessee, has a recipe for poncirus-aide.  Take a barrel of water, a barrel of sugar and add one sour fruit.  The fruit can also be made into marmalade and the rinds candied.

What is the origin of the hardy orange tree?

To introduce a plant is one thing, but for it to be picked and used is another.  Poncirus was listed in the Prince Nursery list in 1823 but didn’t garner much attention at the time.  In 1862, the U.S. Department of Agriculture was established as a separate department, removing its functions from the Patent Office.  William Saunders (1822-1900), was the first botanist/landscape gardener hired by the department, and it was he who popularized hardy orange in the post-Civil War era. 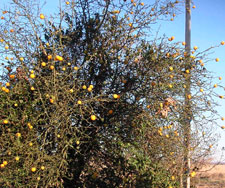 He had plants established in his Washington, D.C., nursery garden when - in 1869 - he received a copy of a letter from a missionary in Brazil describing the attributes of a seedless orange grown in that country.  Propagation wood was obtained and plants budded to the new introduction.  They were shipped off to interested parties in California and became the basis for the seedless naval orange industry in that state.

Saunders provided hardy orange plants to nurserymen throughout the southern states, but it was quickly realized that, although the hardy orange rootstock would survive in cold climates, the frost-tender citrus would not.

The landscape gardening part of Saunders’ job has resonance in American history.  For example, he laid out the park system and oversaw the planting of 80,000 trees in the Nation’s Capitol.  Also, it was he who designed the cemetery at Gettysburg where President Lincoln gave the truly inspiring and timeless Gettysburg Address.

What are the best uses in the landscape?

Poncirus is winter hardy to -10 degrees Fahrenheit so can be used throughout Arkansas.  Grow it in full sun or light shade in any reasonable soil.  It, and its twisted and contorted cultivar ‘Flying Dragon,’ make interesting and unusual small specimen trees if pruned to expose the architecture of the plant.

Or, if you need a barrier planting to keep out dogs, burglars or college students averse to staying on the walks, it can be made into a hedge.  A number of 3-foot tall, impenetrable hedges have been grown for over 50 years at Oklahoma State University in Stillwater.  The hedges are so dense they can be walked on.  Though deciduous, the green thorns are thick enough they look evergreen in winter.