Plant of the Week: Growing goldenrod | Is goldenrod a good garden plant? 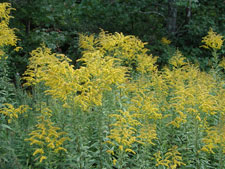 A bewildering number of goldenrods flower along our roadways in late summer and fall.  One of the most common is Solidago canadensis.

All garden flowers were in the beginning wildflowers.  Some made this jump centuries ago into our gardens while others have just been added to the ever-expanding roster.  Some beautiful plants never hit it big as garden plants because they're just too common.

One of these common lants is the goldenrod.

Goldenrods (Solidago sp.) are a confusing group of fall flowering perennials belonging to the daisy family.  More than 130 species have been described with at least 20 kinds found in Arkansas.

One of the most common species, Solidago canadensis, occurs from coast to coast with the exception of Florida and Louisiana. Solidago canadensis appears to be the progenitor of what taxonomists call a "complex" - a series of closely related and difficult to distinguish species.  In this group is S. gigantea with four copies of each chromosome and S. altissima with six copies; S. canadensis has the normal number of chromosomes.

It has erect stems with serrate, five inch long willow-like leaves borne up the unbranched stems.  In late summer and fall 8-inch tall, much branched yellow panicles of blooms are produced at the ends of the stems.  The side branches of the panicle are cloaked by a multitude of individual florets aligned cheek to jowl along the top side of the curved stem.

Evidence suggests that the presence (or absence) of specific soil mycorrhizal fungi - beneficial organisms that affix themselves to the roots of most plants and aid in water and nutrient uptake - determine the ability of goldenrod colonies to establish in these old field habitats.

Can I grow goldenrod in my home garden?

This plant grows 5 feet tall and spreads quickly by means of a wide ranging network of thin underground rhizomes.  It often grows in colonies 10 to 20 feet across.  It's aggressive ways make it ill suited for use in the perennial border, but it can be used in meadow or wildflower gardens.

In the garden, goldenrods are undemanding and easy to grow and a good choice for areas that must fend for themselves.  Rhizomatous types should be either contained by means of a barrier or planted where they can run freely.

Where can I find goldenrod?

Goldenrods in their varied forms are colonizers of sunny, disturbed sites.  They are among the first herbaceous perennials to establish in abandoned fields and along roadways.  Some species are adapted to wet locations while others prefer it high and dry.

Several goldenrods are offered in the nursery trade but you seldom find them offered at local nurseries.  Good ones include the four foot-tall, clumping S. rugosa 'Fireworks' and the 18 inch tall S. sphacelata 'Golden Fleece'.  Other intermediate growing hybrids include 'Cloth of Gold', 'Golden Falls' and 'Lemore.'

*The University of Arkansas Division of Agriculture does not maintain lists of retail outlets where these plants can be purchased. Please check your local nursery or other retail outlets to ask about the availability of these plants for your growing area.

Does goldenrod cause allergies?

Goldenrods are often mistakenly blamed for causing hayfever, but such is not the case.  Because they bloom in the fall and have showy flowers they get blamed for the evil deed done by the real culprit, the stealthy, green-flowered and inconspicuous ragweed.  Goldenrod flowers are visited by more than 100 species of insects that do the job of pollination.