Plant of the Week: Raintree, Golden 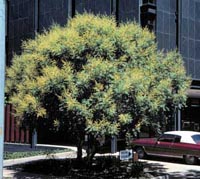 I know it’s politically incorrect to develop a fondness for foreign plants, but I can’t help myself. The golden raintree is one of those introduced plants that has no counterpart in the native American flora, and our gardens would be less beautiful if it were ever to be excluded from our floral lexicon.

Golden raintree is a mid-size flowering tree that usually reaches 30 feet tall and wide with golden yellow flowers produced from early June through late July, depending on the flowering characteristics of the individual seedling.

The flowers of golden raintree are individually small to a half-inch across with four petals, each bright gold and marked at the base with a cinnamon colored blotch. The flowers are borne in large panicles up to 18 inches long and 12 inches wide with hundreds of blooms open at any given time on the panicle.

The first flowers to open are all male flowers, but as flowering commences, female flowers open and, upon successful pollination, the two-inch long inflated seed pods develop. Each seed pod has three sections and resembles a Chinese lantern in general shape. In the summer, pods are lime green in color. But as fall approaches, they turn a shopping bag brown and hang on the tree until late winter.

Many consider the seed pods as attractive as the flowers.

Golden raintree, as a member of the soapberry family, has compound leaves with 13 to 19 leaflets per leaf. Like many members of this family it is adapted to dry difficult sites. It is winter hardy as far north as Chicago. It is usually low branching and develops a round head at maturity. The golden raintree made its way to the West from Beijing about 1750 because of the efforts of a French Jesuit priest named Pierre Nicholas d’Incarville (1706-1757). D’Incarville, after whom the hardy gloxinia (Incarvillea sinensis) is named, was one of the early missionaries sent to China where he arrived in 1742 to begin the Christian transformation of that land. His efforts were largely met with indifference by the Emperor’s court until a French botanist sent him seeds of sensitive plant, Mimosa pudica.

The movements of this touch-sensitive plant delighted the Emperor, and d’Incarville was given seeds of some common north China plants including mimosa, tree of heaven, oriental arborvitae and others.

The golden raintree seeds made their way to St. Petersburg Russia via a three-year long camel caravan where botanists promptly put them on a shelf and ignored them for 20 years. Finally, in 1771, the dried plant specimens were examined and the seeds germinated. The tree was named after a German botanist named Joseph Koelreuter who was one of the first botanists to scientifically study plant hybridization. The tree was introduced into the United States by Thomas Jefferson who received seeds from Madame de Tesse, a correspondent from France.

Golden raintree is an ideal tree for areas where root room is limited and living is hard. It is often used as a tree in small traffic islands in the middle of parking lots and similar tough spots. It will get larger in better sites but does not seem the least bit fussy about where it grows, so long as it has sufficient drainage. It is somewhat difficult to transplant so it is usually better to secure container grown plants from nurseries. It has no serious disease or insect problems.