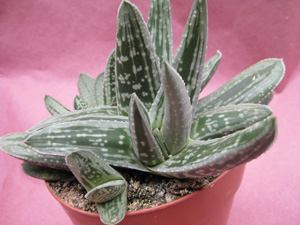 Gasteraloe is a cute and interesting succulent that blurs the lines botanists draw between species.

In the six weeks or so between Christmas and the first glimmer of hope that spring will soon arrive, big box stores have a need to fill space in their greenhouses with plants that might attract the attention of forlorn plant lovers. New and interesting succulent plants have helped fill some of this space in recent years, and have resulted in the national distribution of some plants that have mostly been relegated to the collections of plant nerds. A couple winters ago, on a cold and dreary day, I found a plant new to me: x Gasteraloe ‘Green Ice’.

Green Ice Gasteraloe is a fat-leafed succulent with blunt serrations along the leaf margin arising from a congested crown of offsets. The first offsets from the crown arise with leaf arrangement in a flat plane, but as the offset grows, it begins to fill in with leaves that approach a whorl, but never quite achieve it. The leaves have a green-gray base color marked with elongated stripes and dots of gray. Green Ice has a plant body intermediate in form between an aloe and a Gasteria (ox tongue).

If grown in a warm climate, clumps of Green Ice Gasteraloe will get a foot across and high, but in pots, plant size is restricted by the size container holding it in bounds. My plant has yet to flower, but in photos I have seen of it in bloom, it produces a tubular orange blossom on a 2 foot-long scape that looks more like the blooms of an aloe than a Gasteria.

Green Ice is a hybrid between Aloe variegata and Gasteria ‘Little Warty’.  In a quick Web search I find no name associated with the creation of this hybrid, but Southern California succulent hybridists have been crossing Aloes and Gasterias for a number of years. However, mass production of these and other relatively slow-to-produce succulents now finding their way into major market channels appears of be the work of Rancho Tissue Technologies in Southern California, a tissue culture firm. Many interesting plants languish in horticultural obscurity until propagators, growers and marketers team up to move them into the spotlight.

Bigeneric hybrids are not common in the natural world but do occur. The mule, a cross between a horse and a donkey, is a common example. In plants as in animals, most bigeneric hybrids are sterile, and I suspect it to be the case with Green Ice Gasteraloe, although I do not know for sure.

These bigeneric hybrids are troubling to taxonomists, the branch of botany responsible for classifying and naming plants. Theoretically, a genus is a group of plants with sufficient shared characteristics to group them together but that are genetically isolated from other related, yet unique genera. Usually this distinction holds, but not always.

DNA testing has been used in plant classification since the 1980s and has led to a split in the way taxonomists view the natural world. Traditional taxonomists take a top-down approach and look for minor differences distinguishing the plant in front of them from all others. If enough differences are identified, the plant is given a name, described, published and becomes a new species.

The new DNA-based taxonomy is called cladistics, and it takes a bottom-up approach, looking for genetic relationship and common ancestry buried within the base code of an organism. This work will probably eventually supplant the now 250-year-old Linnaean system of classification. Cladistic analysis has led to some dramatic rearrangement of plant groups and, if combined with some of the traditional elements of traditional taxonomy, should result in better understanding or plant classification. Cladists, because only a relatively small portion of the genome is analyzed, tend to lump lots of closely related plants together.

Taken to its extreme, some cladists are talking about doing away with the use of Latin names altogether and going with the currently accepted language of commerce, the bar code. In their world view, a taxonomist would only need to plop a plant specimen in the auto-analyzer, the machine would do its magic and then spit out all the pertinent data from a Web database. The gardener would go home with a nifty bar code to affix to the plant growing in their garden!

Gasteraloe hybrids are easy to grow and can be treated as most other succulents. They are only hardy out of doors in frost-free areas. My plant goes in my cool greenhouse (40- to 45-degree nights) in the winter where it is kept dry, watering only every month or so. In the spring, it is moved outside to a bright spot that gets some midday sun, where rainfall provides most of its water needs. As it is a vigorous grower, repot every two years to give the clump room to divide. I fertilize with slow-release fertilizer in the spring when the plant is moved outside.