Plant of the Week: Chrysanthemums are a fall favorite | Mums in the home garden 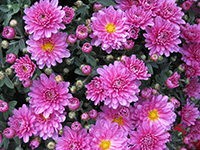 The Latin binomial system for naming the stuff of nature was developed in the 1730's by Linnaeus, the famous Swedish botanist. While gardeners have decried Latin names from the beginning, his elegant system has created a logical way of classifying and then naming new plants.

But after almost 300 years, you would think the need to tinker with the arrangement would have been resolved. Not so, as the story of the lowly garden mum, Chrysanthemum morifolium, shows.

How did the Chrysanthemum get its name?

Fall blooming garden mums have come a long way since their introduction from China in the middle of the 18th century. Breeders have transformed a perfectly respectable plant with grace and beauty into a compact, multi-colored anthill that has the cookie cutter characteristics they so love.

But, that’s another story. Here, let us look at the mischief the boys in the back rooms have been doing as they changed the name from Chrysanthemum to Dendranthema and now back to Chrysanthemum.

What influence did Russians have in naming the mum?

In 1961, Nikolai Tzvelev, a Russian taxonomist, concluded that the type species for the genus Chrysanthemum, C. coronarium and the ancestor of the garden mum, C. indicum, were not closely related enough to be combined in one genus. So, because C. indicum was not the first born son, it had to go to live in a new home he called Dendranthema.

This name change was slow to leak out of the old Soviet empire, being obscured by the climate of the Cold War and the normally glacial rate of change in taxonomic circles. It was not accepted by taxonomists until the late 1980s with gardeners finally receiving word of the decision in 1989. The Europeans were the first to accept the new name, but in the spirit of the new global village in which we now live, Americans pretty much ignored it.

What does a plant name mean for the home gardener?

Latin name changes may seem trivial when compared to the important things in life like paying the bills and giving the dog a bath, but they do cause problems. For one thing, all of your plant reference library is instantly out of date.

The current taxonomic bible used in gardening circles is Griffiths’ Index to Garden Plants that appeared in 1994. It adopted the new name while my old stalwart Hortus III, which appeared in 1976, was stuck with the old terminology.

Hundreds of nursery firms that publish catalogs had to decide what to call the plant with a new name. As the word got out about the renaming, there was significant grousing, but people began to slowly adopt the new name.

How did an English botanist solve the naming problem?

But an English botanist had a suggestion for solving the problem; change the type species for the genus Chrysanthemum to C. indicum, thus force C. cornarium to leave for a new home.

In 1995, this was proposed to the Committee on Spermatophyta, a learned group of botanists appointed by the International Botanical Congress, whose sole mission is to adjudicate such weighty issues. In a very democratic process, the committee voted 9 to 3 in favor of changing the type species to C. indicum, thus giving our garden mum back its name.

By bowing to popular demand and reason, they also abandoned a fairly basic rule of nomenclature that made the new book obsolete while my old book regained its place of prominence on the bookshelf.

Can mums survive the winter? 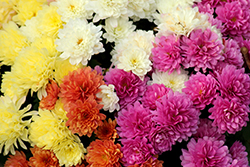 Garden mums are available in a variety of colors from nurseries and mass merchants.

They will continue to open blooms for three to four weeks, or until stopped by a hard frost.

Most people seem to be using mums on the patio as container plants, not transplanting them into the garden. The portion of a garden mum that survives over winter is usually an underground rhizome. Most fall mums are bred for color and not hardiness.

Modern production systems grow mums so fast they never have a chance for the rhizome to form, so if the winter is hard, many mums will freeze out. For this reason, nurserymen prefer calling them "garden mums," not the once popular "hardy mum."

*The University of Arkansas Division of Agriculture does not maintain lists of retail outlets where these plants can be purchased. Please check your local nursery or other retail outlets to ask about the availability of these plants for your growing area.