Flower garden fashion is changeable, but these changes are often a remake of older styles. 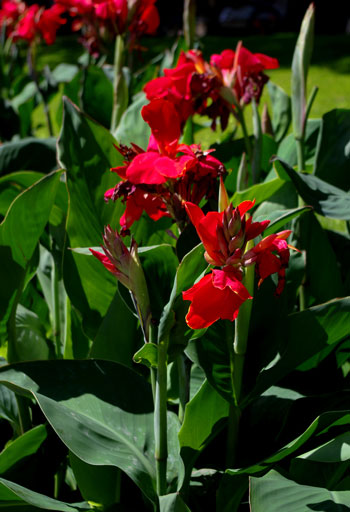 We are in the midst of a cycle of flower garden development that is reminiscent of the transition that occurred about a century ago. Today we follow the worn path of our garden ancestors who moved from the formal bedding-out style of the mid years of the 19th century to an informal and eclectic style of borders filled with an assortment of plants.

Certain plants, such as the old-fashioned garden canna, regain popularity as the style-gods choreograph these changes in taste.

About fifty species of canna are scattered around the tropical and subtropical regions of the world with most of these from the Americas and Asia. Cannas first appeared in Europe in the 17th century when Spanish sailors brought plants back from the Americas. The hard black seeds of the cannas were used to make rosaries.

What are the origins of the canna lily?

In 1848, a French gardener, M. Année, crossed two wild species and began the development of the canna as we know it in today’s garden. By the end of the 1800s, Italian gardeners had introduced the "orchid-flowered" cannas and the development was complete.

Today, there are hundreds of selections of cannas in the garden trade. Most forms are 4- to 6 feet tall with large oar-shaped leaves and terminal spikes of flowers that always seem to look better from a distance than up close. Leaves may be green, bronze or variegated. Flowers come in shades of yellow, pink, red and orange. Cannas are propagated by division of their large branched rhizomes, but they can be grown from seed.

How can I incorporate canna into my home landscape?

The usefulness of the canna in today’s garden is primarily from its bold, coarse textured foliage. It harmonizes well with other tall plants and can be mixed in perennial borders or with plantings of trees and shrubs. Fortunately, we are not seeing it used as a centerpiece for circular beds in the middle of lawn spaces as was the fashion a hundred years ago.

How do I care for canna lilies?

Cannas are considered root hardy only through Zone 8, but we gardeners are always pushing that limit. In a garden I tended a few years ago, I could tell how hard the winter had been by how close to the house the surviving canna were. In bad years, just a few plants survived right next to the foundation, but in mild winters all of the plants survived. Cannas do best when they are reasonably moist, but they seem to resent too much soil moisture in the winter.

Full sun is the best location to grow cannas. They do best in a fertile soil but will grow in most soils if they receive the water they need. If winter hardiness is a concern, cut the clump off in November with the first frost and cover the plant over with 8 to 12 inches of leaves. Or, if you have a suitable location, the rhizomes can be dug with a clump of soil attached each fall. The roots then are stored over winter in an area that will stay cool and dry, but not freeze. The crawl space beneath the home makes an ideal storage location.