Plant of the Week: Frost

Last night we had our first killing frost here at my hillside home in Fayetteville. Some of my neighbors who live at the bottom of the hill had their first killing frost weeks ago, but my position half way up the 500-foot-tall “mountain” allows the cold air to drain past like water in a cascading stream. What is this thing called frost? 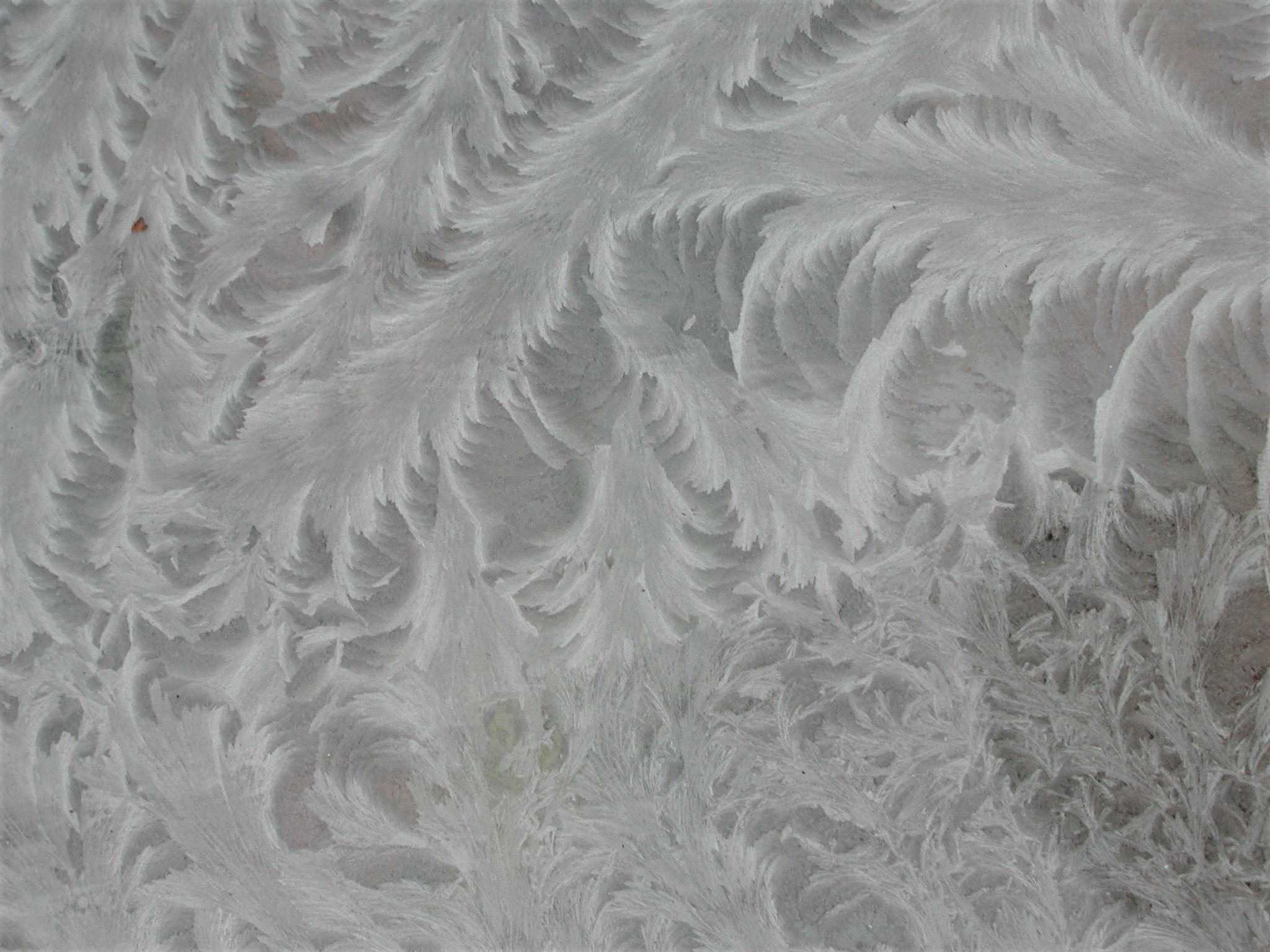 NIPPING AT YOUR NOSE — The fractal formation of frost on the inside of this pane of glass happened when supercooled water vapor made contact with dust on the glass and caused deposition of ice crystals. (Image courtesy Gerald Klingaman.)

The local weatherman is always issuing freeze alerts, sometime describing them as “light frost in low-lying areas,” sometimes calling them “hard frosts” and sometimes the season-ending “hard freeze.” While we all know the basics — that water freezes at 32 degrees F — we often see frost on our windshields or neighbor’s roof when the temperature is much warmer, oftentimes in the mid-30s. How can this be?

First, we must remember that temperatures can vary dramatically in a given area. Because cold air is denser than warm air, it flows downhill like water with the coldest air occupying the lowest points. Fruit farmers called these low areas “frost pockets” and avoided them like the plague because early blooming fruit trees would never make a crop in these locations.

Most official weather recording stations record the air temperature five feet above the ground. At the ground level below the thermometer, the temperature is often several degrees cooler. Fayetteville reports temperature from the University Research farm (on a hilltop north of campus) and at Drake Field, near the Westfork of the White River. It is not unusual for the airport temperature to be five to seven degrees colder than the hilltop location during the fall. So, official temperatures give a broad guideline of local temperatures but don’t necessarily accurately account for what’s going on in your garden.

The dew point is the temperature at which air reaches water vapor saturation. If temperatures fall below the dew point, water is left behind as dew. When the temperature in the fall drops near freezing and the air is completely saturated, frost can form. Here is how it works.

Water vapor in the air is in a gaseous state. If the temperature change is sufficiently fast, water vapor may miss its chance to condense as dew and stay in a vaporous state as the temperature drops below freezing. This supercooled vapor can go through a physical phase change – going from gas to solid in a process called deposition – if there is a nucleation agent present. When it forms on your windshield, dust on the glass triggers the deposition. High in the atmosphere a piece of floating dust could cause a snowflake to form. Down at ground level, the leaves of your plants cause the deposition of frost as the water vapor goes through the phase change process.

The length of time this supercooled water vapor hangs around during the night distinguishes between a light and heavy frost. Because some materials – glass, metal railings, grit on shingles on your roof – give up heat more quickly than soil, stone or organic matter, frost will appear on some surfaces while avoiding others completely. Those tough to scrape frosts we encounter on our windshields in midwinter form when the humidity is low and the dewpoint is not reached until a very low temperature occurs, creating a fine-grained frost layer. Wind that stirs the air, clouds that provide an insulating blanket or an overhanging tree canopy can modify the effects of frost and sometimes make it seem hit or miss.

Hard freezes are different. In this case the temperature drops low enough to freeze the water inside the plant, not deposit a rime of ice crystals on the surface. Freezes rupture cells and kill from the inside out whereas frosts kill cells on the surface of the leaf first. Freezes that happen too early in the fall before a plant is acclimated to cold can rupture otherwise hardy cells that have not had enough time to “harden off.” Hardening off involves moving water from inside the cell to the intercellular spaces where freezing does little or no damage.

People have devised a number of ways of reducing frost injury but primarily they work on the principle of keeping the plant just a few degrees warmer so that frost does not form. Row coverings, stirring the air with a wind machine or bringing the pots in before it freezes are all effective but depend on timely intervention. Once frost occurs, it’s game over.