Plant of the Week: Fothergilla, Dwarf

Dwarf Fothergilla is one of our most beautiful native shrubs with two distinct periods of beauty. (Photo by Jane Platt)

Shrubs are a mainstay for home landscapes, but surprisingly few are from our own rich native flora. Because relatively few of our natives are evergreen, they have been mostly overlooked in favor of exotics. This shortsightedness is changing as gardeners become more familiar with some of these plants such as the beautiful dwarf Fothergilla.

Dwarf Fothergilla (Fothergilla gardenii) is a native deciduous shrub found in the rolling hills of the Coastal Plain from North Carolina to southern Alabama. It suckers at the base and forms shrubs 3 feet tall that will get wider as it grows. It’s a member of the witchhazel family with the leaves and twigs showing that close kinship.

In mid-spring the ends of the branches are covered with white, bottlebrush-shaped blooms to 2 inches long and an inch wide. The honey-scented flowers lack petals with the showy portion being the white stamens. Plants remain in bloom for about four weeks.

The summertime foliage is green to bluish-green, moderately textured and free of injury from insects and disease. The plant, leaf and twig size of F. gardenii are smaller than the similar, but larger F. major (Mountain Fothergilla) that occurs in cool, upland mountainous regions of the southeastern states. It is less prone to suckering and commonly grows to a height of 6 feet or more. A disjunct stand of F. major has been found in a deep Ozark Mountain valley (Searcy County) and named ‘Arkansas Beauty.’ 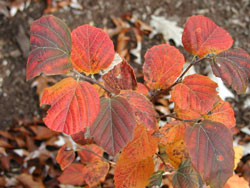 Even though the flowers are attractive, the real show comes each autumn when plants display their fall plumage. Leaves take on hues of yellow, orange and red with individual leaves on the same branch often having their own idea of what color they should be. Many consider this shrub the best for fall color production in our native flora.

Fothergilla was named to honor John Fothergill (1712 – 1780), an English doctor interested in natural history. He corresponded with John Bartram, the mid-18th century Philadelphia plant collector, for over 20 years. He was especially interested in fossil specimens, plants the natives used in medicine and mineral waters used for medicinal cures. In 1767, he diagnosed Bartram’s ailment from far off England and recommended a course of blood letting. Were the ailment serious, the patient would have no doubt succumbed by the time the enquiry and response made its four-month roundtrip journey.

F. gardenii honors Alexander Garden (1730-1791) the Charleston, S.C., doctor who first collected the plant and brought it to the attention Johann Murray, a German botanist who described it in 1765. Dr. Garden is more often remembered for the quintessential Southern plant from China and Japan – Gardenia – that was also named in his honor.

Dwarf Fothergilla is small enough to fit comfortably in foundation plantings, in mixed borders or massed in woodland gardens. It grows in sun or light shade but blooms best and has more intense fall color in brighter locations. The dwarf Fothergilla is more tolerant of full sun condition than the Mountain Fothergilla that is best in some shade. Both species are hardy from zones 5 to 9. Fothergilla only has moderate drought tolerance so plant it in rich, fertile soil that is kept moderately moist during the summer.