Plant of the Week: Fir trees

FAYETTEVILLE, Ark. – With the holiday season in full swing people across the state are picking out their Christmas trees. Of these, the most stately and pricey are several species of firs (Abies sp.), trees typically found in the cold and mountainous regions of the world. Though firs don’t normally prosper in the heat and humidity of the South that doesn’t keep we plant nerds from trying them. 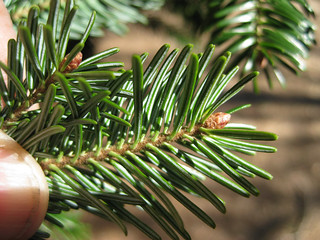 Firs have white grooves on the under surface of their needles. (Image courtesy Gerald Klingaman).

Firs are tall, narrowly pyramidal needle-leaf evergreen trees capable of reaching 200 feet in their native haunts. About 50 species are known from mountainous regions of the northern hemisphere from northern Africa, throughout Europe, Asia and North America where they occur in both the Appalachians in the east to the western ranges where they reach as far south as Guatemala. As a group they are decidedly slow growing and shun hot, dry and humid environs.

This mature fir tree on the U of Arkansas campus in Fayetteville is the only one of its kind that Gerald Kingaman knows of in Arkansas. (Image courtesy Gerald Klingaman)

Fir needles are produced singly down the stem in a two-ranked profile that lies flat. The needles are 1 to 2 inches long, usually green above but marked by a pair of long white bands on the lower surface. On close inspection it is easy to tell true firs from other members of the pine family by the attachment of the needle to the stem. In firs, the needle is attached by a rounded suction cup that, when it falls away in three years, leaves a rounded leaf scar.

Probably the most easily recognized difference between firs and the rest of the conifers with which they might be confused are the cones. These appear high in the tree and are held erect like candles and may be brown or a beautiful blue. Upon reaching maturity they shatter apart with the cone disassembling as it releases the seed.

A 50-foot tall fir on campus at the University of Arkansas in Fayetteville has intrigued me for the past 40 years. Other than the fact it is a fir I’ve never been able to identify it and never found any record of who may have planted it. My suspicion is that it is an Asian fir, probably introduced to campus in the early years of the 20th century when the USDA was sending plant explorers out in search of useful plants.  As a land grant college, it would not be surprising to think that some of these might end up at the UofA.

What I find intriguing about this particular fir is that it has stood up to the stress of campus life with little or no care for so many years. It had a companion tree planted south of campus but this tree, probably damaged by construction, succumbed to the terrible 1980 drought.  The campus tree was unscathed by the drought and likewise shed the two inches of ice of the 2009 storm. It is a tough tree and it inspired me to try other firs at the Botanical Garden of the Ozarks.

My experimental planting was modest, only consisting of six species, and got off to a bad start because the small trees went in the ground in 2011. That was the terribly dry and exceedingly hot summer that broke all the area temperature records. All but two of this first planting died, so I still can’t claim much success in growing firs in an Arkansas climate. But as Tony Avent says, “You can’t say a plant won’t grow until you’ve killed it at least three times.”

A more practical way of getting to know the firs may be at the Christmas tree lot. Fraser fir, Noble fir and Balsam fir are among the most elegant of Christmas trees. They hold their needles well and have the right look and branching pattern to display their ornaments well. Douglas fir, an equally good Christmas tree, is not a true fir.