Plant of the Week: Fern, Autumn 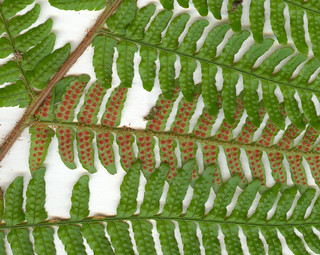 FERN SPORES -  The red sori on the undersurface of the autumn fern give the plant part of its scientific name. (Image courtesy Gerald Klingaman)

My fascination with hardy ferns stated about 20 years ago amidst a self-induced financial crisis. I'd maxed out my credit cards, and like all red-blooded Americans, refinanced the house, caught up on the bills and found myself with a zero balance credit card in my pocket.

Two months later, walking through the Arkansas Nurseryman’s convention trade show, I came upon a vendor selling hardy fern liners (small transplants). In a matter of minutes I was in the fern business with 50 each of 12 different kinds of hardy ferns. Of these, the autumn fern (Dryopteris erythrosora) has been the best performer in my dry woodland garden.

Autumn fern is one of about 250 species native to woodlands in the north temperate zone. The group goes by the general name of wood ferns or sometimes male fern. Distribution is centered in East Asia but a number of species are found in the eastern states with eight native to Arkansas, the most common of which is marginal wood fern, Dryopteris marginalis. D. erythrosora is native to eastern China, Japan and higher elevations of the Philippines. 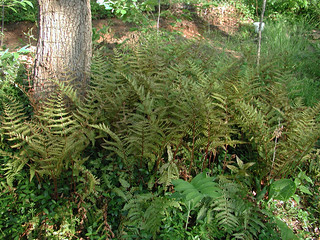 Autumn fern is a normal looking fern with twice divided fronds that grow about 2 feet in length.  For me, plants reach 18 inches in height with a 24-inch spread in five years. The stipe (main stem of the frond) is stout with cinnamon colored fuzz along the length of the stem but is more noticeable at the base. The leaf texture of the plant is thicker than most ferns.

It is one of the best evergreen ferns with old fronds dying down in early spring when the new fronds emerge. The new fronds emerge with a bright, shining orange-red color that persists for several weeks and gives the plant its common name. During the rest of the year the fronds are a bright yellow green. The species epitaph means having red spore cases that can be plainly seen in the spring when the undersurface of the frond will be lined with double rows of fuzzy red sori on each leaflet.

‘Brilliance’ is a cultivar that seems to be replacing the species in the nursery trade.  It appears similar to the species but with a more yellow-orange-red tint to the emerging fronds in the spring.

While autumn fern does have a creeping, rhizomatous root system it is by no means fast spreading. The crown expands in size an inch or so a year so is for all intents and purposes can be considered clump forming, not rhizomatous.

My 20-year experimentation with hardy ferns has been informative if not always successful. My main observation is that ferns in general do not like the dry clay on my shaded lot. Four species of wood ferns have fared best in my unreplicated, unscientific trial but only autumn fern is really a very good ornamental plant. With its evergreen fronds that remain erect during the winter it is always attractive while some of the other species such as marginal wood fern and giant wood fern, while technically evergreen, don’t provide much ornamental appeal because the fronds lie flat on the ground during the winter.

And autumn fern is very happy in my garden because it has naturalized in three locations at the base of dry-stacked stone walls, the only wood fern to do so. Even our native marginal wood fern doesn't naturalize for me because the site is too dry. Autumn fern has tremendous tolerance for drought once established. I planted a cluster of a dozen plants at the base of an American elm, a notoriously shallow rooted and thirsty tree, and the planting persisted for almost 20 years until the 2012 drought finally killed the plants. A similar planting at the base of a post oak, a less shallow rooted and thirsty tree, still remains.

Autumn fern is an excellent groundcover plant for locations with bright light but shade during the hottest part of the day. Plants are hardy from zone 5 through 9 and grow well in slightly acidic sites. Like all ferns, a highly organic planting media that is maintained moderately moist is preferred but this tough fern will survive less than perfect conditions once established.  I've never had much luck dividing my plants but in a deep, rich soil clumps can be divisible in late winter before new growth starts.