Plant of the Week: Hardy Eucalyptus 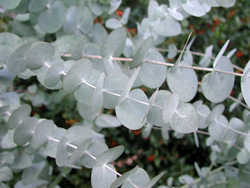 The cider gum is the most cold hardy of the silver-leafed eucalyptus. (UofA Division of Agriculture photo by Gerald Klingaman)

Plants of the southern hemisphere are common in our gardens, but most of these are annual flowers such as petunias, geraniums or scarlet sage. Few woody plants are found because they lack the cold tolerance needed to survive outdoors during our winters. But there are exceptions. Of these, the winter-hardy eucalyptus bears a closer look.

More than 700 species of Eucalyptus - collectively known as gum trees and belonging to the myrtle family - have been described, with all but 15 of these native to Australia. Eucalyptus are typically large evergreen trees that have become important, and oftentimes controversial, trees in tropical parts of the world.

The timber-type eucalyptus become enormous trees with age and have been widely planted in California. There they are often maligned for being too big, too messy and too likely a source of fuel during fire season. The timber species evolved in a climate with a fire-supported ecology so they fit right into the California environment. 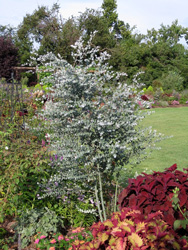 The silverdollar gum may freeze to the ground in cold winters but quickly regrows to produce its beautiful and unique leaves. (UofA Division of Agriculture photo by Gerald Klingaman)

A number of eucalyptus have a degree of freeze tolerance but two species, E. cinerea (Silverdollar Gum) and E. gunnii (Cider Gum), are perhaps the most commonly grown because of their beautiful silvery foliage. These trees are usually seen as large, fast growing shrubs in areas where the temperature drops below 20 degrees during the winter. Though capable of attaining 50 feet in height, they simply don't reach tree-sized proportions in colder climates.

Eucalyptus have a pronounced difference in appearance between their juvenile and adult leaves. Juvenile plants have waxy, silvery leaves that are attached in alternating pairs down the stems. Silverdollar gum, a commonly used cut foliage in flower arrangements, has the leaf bases fused together with the stem seemingly protruding through the center of the leaf. Cider gum has a pair of elongated leaves that don't merge at their base. In the adult phase the leaves are lance shaped, have alternate arrangement and a blue cast.

Eucalyptus flowers are not produced on plants in the juvenile stage of development. The fruit when seen on mature trees is a woody, bell shaped capsule.

Eucalyptus oil is distilled from the leaves of several species. It is commonly used as a disinfectant, an odorant and in several medicinal preparations.

Cider gum, called so because of the sweet, cider-tasting sap mature trees produce when wounded, is hardiest of the eucalyptus species, being recommended as far north as zone 7. It is native to Tasmania, one of the southernmost (therefore coldest) outposts for the species in the southern hemisphere. The silverdollar gum is native to the southeastern corner of Australia and is considered a zone 8 plant.

All of the hardy eucalyptus have an Achilles' heel in a cold climate; they keep growing until they are stopped by freezing temperatures. This inability to recognize the onset of winter makes them vulnerable to dieback. In hard winters, stems may die back to the ground, as often happens for silverdollar gum at the north edge of its range, or die back to larger limbs. This dieback coupled with the pruning needed to remove the dead wood keeps the plants in the big shrub category of 10 to 15 feet tall.

These species are fast growing and can make 10 or more feet of growth in a single season. They are best planted in a south facing, sheltered site where they receive full sun. They are adaptable to any reasonable soil and will tolerate drought, but don't expect luxurious growth if conditions are too dry. Branches can be cut and air-dried for use in indoor arrangements.