Plant of the Week: Elm - Slippery 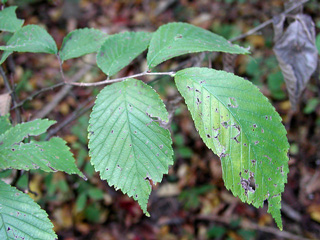 Slippery elm is one of the most common elms in Arkansas but it often goes unconsidered as just an ordinary elm. (Image courtesy Gerald Klingaman) Download High Resolution

With Independence Day approaching it is not hard to think of the Liberty Bell in Philadelphia. As with most things in early Americana there is a plant connection, in this case the yoke of the famous bell is a 200 pound beam of slippery elm (Ulmus rubra). Some sources state the yoke is American elm (U. americana), creating a more symmetrical storyline, but most sources cite both names even though they are distinct and the wood should be easily distinguished.

Slippery elm, also called red elm for the color of its heartwood, (American elm is sometimes called white elm for the same reason), is a deciduous tree growing to 60 feet tall with a form similar to that of American elm but with a more upright habit of growth.

Slippery elm and the American elm are the only native elms with large leaves, sometimes reaching 6 inches or more in length, but in slippery elm the upper leaf surface has a sandpapery feel whereas the American elm is smooth.  It may turn a bit yellow- brown before leaf drop in the fall, but generally fall color is wanting.

Like American elm, slippery elm is spring fruiting with the single-seeded samara being coin shaped, terminally notched and up to a half-inch in diameter with the margins hairless. In American elm, the samara are ringed by an easily visible veil of hairs. Though both species are native from Quebec to central Texas, including every county in Arkansas, barriers to hybridization must be in place for no natural hybrids are reported for these wind pollinated trees.

Slippery elm gets its common name from the fact that the inner bark of the tree produces a mucilaginous powder that increases in volume 60 to 140 times when soaked in water. The powder contains primarily starch and water-soluble polysaccharides in an alternating linear chain of complex sugars with abundant side branching.

In the Revolutionary War, an American soldier is said to have survived for two weeks in the wild eating primarily the inner bark of slippery elm. A more modern day report of using elm bark as an emergency food source comes from Yang Jisheng’s Tombstone: The Great Chinese Famine, 1958-1962.  In it he reports that entire provinces were stripped of elms, and the trees themselves uprooted, as some of the 36 million people who starved to death during those turbulent days of the Cultural Revolution did everything they could do to survive.

Slippery elm has a long history of use in North America. The mucilaginous characteristics of the bark make it easy to remove from trees in late spring so several Northeastern native tribes used planks of it to shingle their lodges.  Before applying it to the lodges, the inner bark (the immature cells surrounding the cambium layer) was harvested for medicinal properties. Next, strands of phloem cells were stripped out to weave together for bowstrings and basket weaving.

The medicinal properties of the tree were explained to the European settlers by Native Americans early on. Schoepf’s 1787 Materia Medica Americana calls it “salve bark” and recounts its use as a poultice for musket ball wounds during the Revolutionary War.  It was – and still is – widely recommended for a wide assortment of gastrointestinal ailments and constipation.

Cough drops made from slippery elm are still available and powered and encapsulated forms are widely available as a food supplement/ herbal remedy. As recent as 10 years ago bark rustlers were arrested in some of the Appalachian natural forests for stripping (and killing) bark from growing trees. Reportedly, a 50-pound bag of dried bark had a value of $150.

Slippery elm is not sold in the nursery trade though it is occasionally encountered as a wildling in gardens. It is s susceptible to Dutch elm disease but its population was never decimated like that of the more stately American elm.  It does not seem to have been used much in the various breeding programs to create DED resistant elms for American gardens.   It is considered hardy from zones 3 through 9.