Plant of the Week: Edelweiss 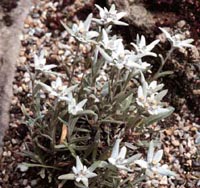 Like millions of other American TV viewers, I recently sat down and watched the 35th anniversary showing of The Sound of Music -- one of the most beloved musicals of all time. One of the songs, "Edelweiss" is about a wildflower. Being as most of us know only what we see on TV, it might be interesting to look at this little plant and place it in perspective.

Edelweiss is a small wooly perennial in the daisy family that grows about 6 inches tall when in full bloom. It grows throughout Europe in the Alps but also extends into the Pyrenees and Caucasus regions. It grows in full sun in alpine meadows having well drained calcareous soils.

In summer, a stem shoots from the basal rosette of wooly leaves bearing a 2-inch wide star-shaped cluster of white-wooly bracts clustered around a central display of inconspicuous florets. The Latin name of the species translates as "lion’s foot" for the wooly, star-like character of the inflorescence.

Linc Foster, the now deceased godfather of American rock gardening says of edelweiss, "this is the species that adorns the traveler’s hat" in Europe. It is the national flower of Switzerland. Apparently, it is easy to dry and has been collected extensively for that purpose, so is now a protected species.

The song "Edelweiss" is not an adaptation of a native folk song of Austria or any European country. It was the last song that Rogers and Hammerstein wrote together in 1959 for the stage performance of their play, The Sound of Music.

Hammerstein, who knew he was dying when he collaborated on the song, died about nine months after completing the work. Of course the 1965 film version of the performance where actor Christopher Plummer sang Edelweiss while portraying Captain von Trapp burned this small plant into our collective consciousness, but in reality most Europeans would have trouble picking it out in a lineup.

This classic film, directed by Robert Wise and stared in by Julie Andrews, has become a worldwide classic. A friend from Malaysia tells me that on Children’s Day - the Asian equivalent of Mother’s or Father’s day in the US -- the movie is broadcast every year and the family sits down to enjoy it together.

The movie won five Academy Awards, including the award for Best Picture when it was released. But unlike many award winners, The Sound of Music has those special qualities that make it a timeless classic.

Edelweiss seed is available and can be grown in the rock garden, but it’s run will

probably be much shorter than the four years the movie ran in U.S. movie houses when released. It germinates easily, but must be watered carefully to keep it from drowning out as a seedling.

Once in the garden, edelweiss should be sited in a nook between rocks that has a well drained rock garden soil consisting of five parts coarse grit, one part crushed limestone and one part compost. Then, provided the humidity doesn’t turn the plant to mush in August, it should struggle along for a year or two despite our summer heat.