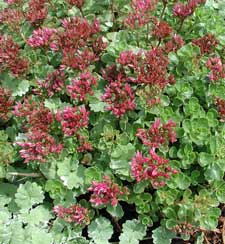 Dragon's blood sedum is an easy to grow evergreen sedum that has green leaves and red flowers in the summer. In the fall leaves turn maroon and persist through much of the winter. The variegated form called ‘Tricolor' is attractive during the summer.

Gardeners aren't picky. They just want plants that will grow in poor soil, thrive on neglect and look good throughout the year. Surprisingly, a few plants actually meet these rather demanding criteria, including the little groundcover called Dragon's blood sedum.

Sedum spurium is a trailing succulent groundcover from north-central Asia that forms a tangle of stems with leafy branches 2 inches tall during the summer. It has roundish, notched half-inch diameter leaves that are borne opposite one another but arranged at 90-degree angles from pair to pair down the length of the stem. The stem is ropy and roots freely. The leaves are bright green during the spring, gradually taking on shades of maroon as the winter approaches. In most areas, only the leaves near the ends of the stems are truly evergreen.

The pink, red or carmine flowers of this little sedum are surprisingly showy, occurring in flattened 4-inch tall clusters to 3 inches across in midsummer. Individual flowers are small and star shaped with five pointed petals.

Several clones are offered with ‘Schorbuser Blut' (Dragon's Blood) the most common. This German introduction was one of the first plants widely touted during the 1970s in the often fraudulent ads of the Sunday supplement section of the newspaper. It was promoted as the best groundcover for all sorts of impossible situations, and surprisingly, it really is. While it won't grow in deep shade, it tolerates semi-shade and grows in almost any soil. ‘Red Carpet,' with red leaves, and ‘Voodoo,' with mahogany colored leaves, are also improved colored leaf forms. 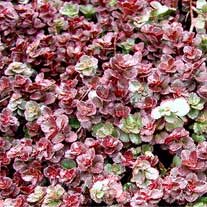 ‘John Creech' is a smaller, slower growing selection with pink flowers in the fall. It was collected by Creech in Siberia in 1971 when he was the director of the U.S. National Arboretum in Washington, D.C.

‘Tricolor' is a beautiful variegated form with white, suffused with pink variegation around the margins of the leaves. It is not as vigorous as the green-leaved forms and tends to be somewhat unstable because of its chimeral nature, so plan on removing the non-variegated branches.

Of the sedums tried in the groundcover trials at the Arnold Arboretum, S. spurium was the best. While it is not completely evergreen, it retains enough vegetation to give the appearance of being so. Plant divisions or new plants on 12-inch centers when using it as a groundcover. It is hardy from zones 3 through 8. It will not tolerate foot traffic but otherwise is a good, carefree groundcover for sunny or partly sunny sites. It is also well-suited for use in rock gardens, between stepping stones (when the soil is recessed a bit) and in outdoor containers. Propagation is easy by division or cuttings taken at any season. 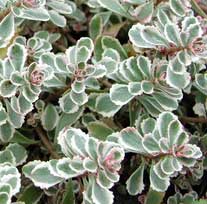