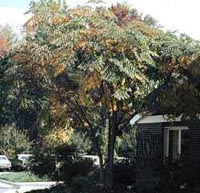 Plant names are intriguing. Good ones rely on descriptive, colloquial word-play to give even the uninformed some sense of what the plant must be like. Devil's Walking Stick, also known as Hercules' Club, conjures scenes of mythical proportions, but it is doubtful that the devil ever used the small native tree as a staff or that Hercules made a club from its spiny trunk.

Devil's Walking Stick, Aralia spinosa, is a 30-foot tall tree native in the southeast and as far north as southern Illinois. It is found throughout Arkansas and shares close kinship with English ivy, ginseng and the houseplant Schefflera. It often is found as an understory tree, peeking out from under the skirt of a forest canopy along the edges of roadways where the light conditions are more to its liking.

This tree suckers from the roots and usually is found with the original, larger tree standing in the midst of a small grove of head high erect, unbranched rake-handle sized stems. All of the stems, but especially the younger, unbranched ones, are covered with quarter inch long prickles. Larger trees are seldom met with, but when the tree is grown in full sun, it develops an oval outline with the accompanying stout-stemmed suckers standing at attention in its shadow.

The leaves are twice or thrice pinnately compound with individual leaflets two inches long. The entire compound leaf sometimes reaches five feet in length. The stout petiole half encircles the stout stems to keep it in place. In the fall the leaves are yellow to purple.

While the stout stems and large leaves are interesting, it is the flowers and subsequent fruit that get devil's walking stick noticed in the woodlands. In mid summer it produces large, greenish-white panicles at the ends of the stout branches. They are composed of hundreds of ping-pong sized umbels and may be two feet across. The umbels are followed in the fall by dense clusters of purple, pea-sized berries that bow the stems over with their weight.

Despite its unique shape and interesting appearance, the tree has had little use in the medicines and folklore of Native Americans. The late W. C. Young, a former county agent who grew up in the Ouachita Mountains, once told me that as a child he heard the tree called "toothache tree." A Frenchman, writing in his history of Louisiana in the late 1700's mentions that the inner bark of the tree is pealed, and a pea-sized ball is clamped on the offending tooth. Reports out of Virginia suggest that the leaves are poisonous to cattle. Its wood is useless even as firewood.

Devil's Walking Stick was popular in landscaping only during the Empire building period of the late 19th century. As the giants of the oil, railroad and banking industries began building their East coast homes after 1880, they launched a wholehearted attack on good and common sense. Wooden gingerbread on the eaves and cast iron mastiffs on the lawn were all the rage. And they showcased in their landscapes bizarre plants forms such as weeping mulberry, Harry Lauder's Walking Stick and Devil's Walking Stick.