Plant of the Week: Rocket, Dame's 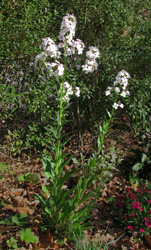 Dame's rocket is a naturalized (weed / wildflower) that is commonly seen throughout most of the United States during the spring months. (University of Arkansas Division of Agriculture photo by Gerald Klingaman.)

Fashion comes and goes in flowers as with everything else. Dame's rocket (Hesperis matronalis) is an invasive weed or a naturalized wildflower, depending on your own personal perspective about the purity of nature. Four centuries ago there was no question about the worth of this plant - it was the latest and greatest addition to early Baroque gardens.

Dame's Rocket is a biennial of the mustard family that produces a mounded cluster of leaves during the first year and, come spring of year two, sends up a branched, meter-tall spike of showy purple, pink or white blossoms that are fragrant at the end of the day. Leaves near the base of the flowering stem are 3 to 4 inches long, lance-shaped and sessile (without a petiole).

The flowers are an inch or more across with four equally sized petals that form a plus as is typical with all members of the mustard family. Following flowering, each blossom produces a slender, cigar-shaped capsule packed with seeds. One plant can produce up to 20,000 seeds.

Looking at the USDA plant range of this species, it is found in all Canadian provinces and all but a few Southern states. It has a preference for roadside ditches and cool, moist forest-edge sites. The plant is native to Eurasia and has been grown since Roman times in gardens. It was introduced from England into the Colonies as early as 1562, but some claim its nationwide distribution did not occur until it was added to mixed lots of wildflower seed for naturalizing. Naturalizing used to be a good thing.

Flowery fashion is ever changing and in the early 1600s Dame's Rocket - then also known as Dame's Violet and the Queen's Gillyflower - was hot. We have an excellent record of plant knowledge during the Baroque period preserved in Gerard's Herbal, or General History of Plants. Gerard published his English herbal in 1597, based largely on a translation of Rembert Dodoens' herbal, which was published in 1554 and was itself based in part on an earlier work. In 1633, Thomas Johnson rewrote Gerard's earlier work, corrected many errors and made lots of additions. In the 1975 Dover edition of Johnson's 1633 rewrite, Gerard's name still adorns the title page.

In the herbal, which was primarily published to serve as a reference for physicians using plants to cure various ailments, Johnson almost gushes in his description of the plant he calls Dame's Violet. He is especially high on the newly introduced double-flowered forms. In it he tells us that it is Pliney, the Roman herbalist and author, who called the plant Hesperis. Only one medicinal use - diffusion in water to produce a sweat - is mentioned. Obviously, this is a plant of the flower garden, not the apothecary garden.

Dame's rocket reseeds freely and is banned as a noxious weed in three states; Colorado, Massachusetts and Connecticut. It is sometimes seen in gardens, where it lurks around in the background with plants like moneywort (Lunuaria annua), a close relative. Though seeds are still offered in the seed trade, it is mostly relegated to “pass along” status where friends share starts.