Plant of the Week: Crapemyrtle 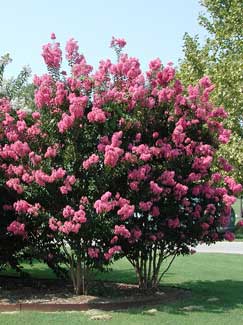 Near East Crapemyrtle is one of the most popular selections of this summer flowering tree. (Image courtesy Gerald Klingaman)
Download High Resolution

In the South the so-called lazy days of summer conjure up images of fireflies, watermelons and crapemyrtles in bloom. Crapemyrtles are quintessential southern plants so deeply ingrained in our landscapes and lives they seem to have always been here, but such is not the case.

Crapemyrtles (genus Lagerstroemia) consist of about 50 species of woody trees and shrubs of the loosestrife family scattered throughout the Indian subcontinent from Korea to Australia to modern day India.  L. indica, the plant our grandparents grew in their gardens, hail from China and Korea where it has been grown in gardens for more than1,000 years. Since the 1970s many of the most popular crapemyrtle selections now found in nurseries are hybrids created at the U.S. National Arboretum by the late Dr. Don Egolf, who hybridized the old favorite with a Japanese species (L. fauriei) to create mildew resistant- and more cold-hardy forms.

It is difficult to describe the typical crapemyrtle because they come in such a bewildering array of shapes, sizes and bloom colors. From a landscape perspective it is perhaps best to think of them in four size groups. The tree form crapemyrtles are 15-to 35-foot tall, usually multiple branched trees with a rounded crown. It is the tree form crapemyrtles that produce the beautifully colored and sensuous trunks in shades of gray, gray-green and cinnamon colors that require you to reach out and touch them to assure yourself they are real.

The shrub form plants are those that grow from 6-to-15 feet tall with a densely brushy character.  The dwarf crapemyrtles are those that grow less than 6 feet tall - but truth be told - if left unpruned long enough they will gradually grow large enough to attain shrub stature. The newest category of crapemyrtle growth forms are the prostrate or trailing forms that creep across the ground and are used at the top of retaining walls or even in hanging baskets. 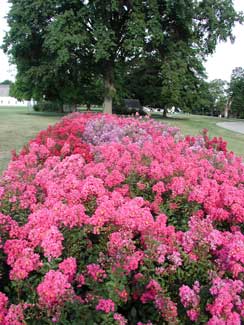 Crapemyrtles come in a bewildering array of sizes and shapes including these dwarf selections that were introduced by the University of Arkansas in the 1970s. (Image courtesy Gerald Klingaman)
Download High Resolution

Crapemyrtles are late to leaf out and usually don’t produce their first leaves until mid April.  New leaf growth is often tinged with maroon with the oblong leaves turning green as they reach full size. Fall color is usually excellent on older specimens and seen in shades of yellow, orange, red or coppery-red.

Flowers are produced on new growth during the summer in terminal panicles and appear in shades of pink, purple, red, or white. The individual blooms are about 1-inch-wide with six stalked petals formed as from crumpled crepe paper. Yellow stamens serve as counterpoint but are only visible on close inspection. The panicles tend to be cone shaped and 6 to 12 inches long.  Depending on the cultivar, bloom season will commence as soon as late spring to as late as early August. If bloom panicles are pinched off plants will continue to bloom, giving rise to the Chinese name for the plant “Hundred-Day Red.” Seedpods are produced in profusion and are about the size of a peanut.

Crapemyrtles were introduced to the west in 1759 and made it to the United States in the 1790’s where George Washington grew it at Mount Vernon.  But its commercial introduction happened simultaneously in Charleston, S.C., when French botanist Andre Michaux established a nursery to grow the plants he was gathering in the southeastern states.  It soon became a staple of the large plantations and southern landscape was changed forever.

Crapemyrtles are easy to grow from zone 7 through 9 where they tolerate almost any soil conditions so long as they are in full sun. They love heat and tolerate drought conditions better than almost any other landscape plant. In a future column we will discuss the different views on how to properly prune crapemyrtles.

Cold they don’t like so much. Crapemyrtle trunks will be winterkilled somewhere between zero to 5 degrees Fahrenheit, which makes north Arkansas the practical northern limit of where they can be grown as trees. I made a planting of crapemyrtles in 1992 in Fayetteville and, though they all froze to the ground in a cold winter of 1994, they soon recovered and made fine 15 to 25 foot tall specimens until the severe winter of 2011 when they all froze to the ground again.  In two years the stump sprouts have regrown and the trees have regained half their original height.

Interestingly, the Easter freeze of 2007 that dropped the temperature to 17 degrees F on April 10 and held it below freezing for 48 hours, devastating many native trees and shrubs, didn’t phase the crapemyrtles because they were still fully dormant.