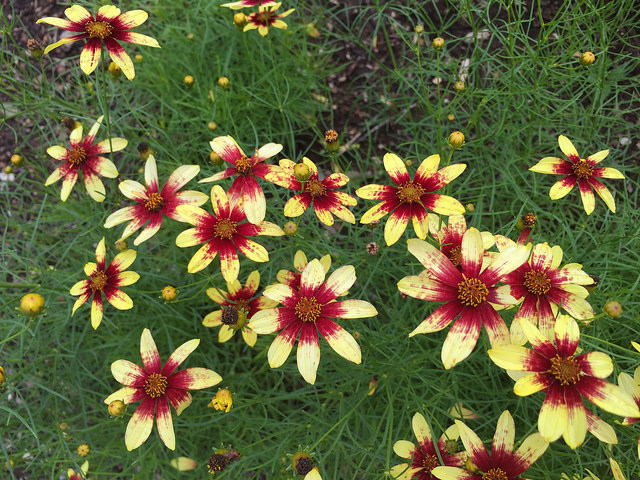 Coreopsis hybrids: Hybrid Tickseed Coreopsis -- The white core of this red leafed cabbage shows the dwarfed stem of the plant. Brussels sprouts never had the dwarfed characteristic of cabbage but instead small axillary buds form just above the white side branches in the nodes of the leaves. (Image courtesy Gerald Klingaman)

FAYETTEVILLE, Ark. — American native wildflowers have long been admired.  Many journals of the people who crossed America in the 1840’s and 50’s on the Oregon Trail spoke of the beautiful wildflowers of the prairie states.  But for more than a century these plants were neglected in favor of European garden flowers.  Beginning in about 2000, breeders took up a new group of American wildflowers, the Coreopsis, which are now showing the touch of the breeder’s hand.

Hybrid coreopsis are a mixed lot of plants crossed from eight or so of the 75 species of Coreopsis native to North and South America.  Coreopsis are members of the aster family and mostly grow as herbaceous perennials in sunny, grassland meadows.  Plants are summer flowering and range from 1-3 feet tall, although most of the modern hybrids are in the 18-24 inch range.

Plants tend to be rhizomatous and spread from a central crown.  Leaves are either broad and more concentrated to the basal portion of the plant (as for example the yellow flowered C. grandiflora) or threadlike and airy (as seen in the yellow and red flowered annual form C. tinctoria).  Flowers are 2-3 inches across with yellow the most common color, although red, maroon and even white forms are now available.

Coreopsis, being members of the aster family, have single seeded achenes which – at least to the botanists who named it – looked like a bedbud, hence the Latin name.

Prior to 2000, coreopsis breeding was primarily limited to selecting improved forms within each of the half dozen or so species that were commonly grown.  In the last years of the 20th century, Dan Henkley from North Carolina’s Plants Delight Nursery and Darrell Probst, the Epimedium guru from New England, made several collecting trips through the southern plains states collecting plants they felt had commercial potential.

Probst began his breeding program with five wild-collected species and eventually increased the number to eight.  Probst crossed and recrossed these plants through at least six generations to create the “Big Bang” series of hybrid coreopsis which, according to his patent application in 2008, were selected “to develop cultivars that are long-lived, sturdy, exhibit a true perennial habit and (are) cold hardy to at least USDA Zone 5 in a wide range of colors and plant forms.”

“Red Shift” (shifting towards red in late season), “Mercury Rising” (red), “Full Moon” and “Galaxy’” (large yellows) are some of his Probst’s hybrids.  Many of the plants, because of their hybrid background, are sterile and bloom for at least two months during the late spring and summer and may resume blooming after the fall rains cool things down in September.

Other breeders have taken up the challenge of improving these American wildflowers.  Prominent among them are Pierre Bennerup of Sunny Borders Nursery in Massachusetts and Patti Bauer of Bauer’s Forever Perennial Farm in Pennsylvania who introduced the Cruzin’ Series of hot-orange coreopsis in 2009.

Hybrid coreopsis are sun loving perennials that do well in average garden soils.  Once established they have good drought tolerance and are free of serious pest and disease problems.  The hybrid forms tend to be long blooming and provide several months of color.  Because of their short stature they are best in the front of the border.  Late winter division to reinvigorate the clump every few years will likely help keep the plants thriving long term.