Plant of the Week: Copperleaf 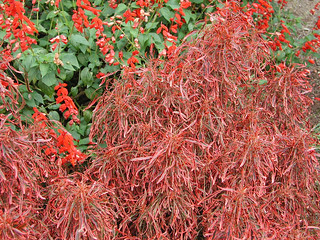 Acalypha 'Firestorm' - Copperleaf is one of the many variant forms of this tender woody shrub seen in summertime gardens. (Image courtesy Gerald Klingaman)

Late summer can be a tough time in the garden because oftentimes plants are lolling about with their tongues hanging out -- that is if they had tongues. However, a number of plants love the heat and don't come into their own until summer is in full swing. One of these is copperleaf (Acalypha wilkesiana), a tropical shrub that can give stunning foliage effect in the summer garden.

Copperleaf is one of about 450 species of tropical and subtropical trees, shrubs, perennial and annual weeds of the spurge family that are uniformly scattered around the world. Unlike most members of the euphorbia family,Acalypha have clear, not milky sap. This species is native to islands of the southern Pacific but has long been cultivated by Polynesian peoples so its actual homeland is a bit uncertain. In tropical climates it grows as a rounded, multi-stemmed evergreen shrub to 10 feet tall.  Because of its tropical origins it is frost intolerant and doesn't even like cool weather, experiencing chilling injury when temperatures drop below 40 degrees Fahrenheit. 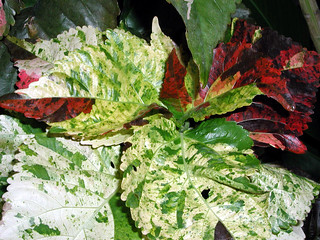 Copperleaf is a heat-loving tropical that makes a real show in the late summer landscape. (Image courtesy Gerald Klingaman)

This species is grown for its large, colorful leaves. In the typical form the leaves are 4 to 5 inches long and 2 to 3 inches across with serrate margins. The leaves have a coppery-green base color with red splotches, giving the plant a mottled appearance. The mottling and coloration are more pronounced in the heat of summer and when the plants are grown in full sun. Many leaf forms have been selected with some being highly crinkled while others such as in the threadleaf copperleaf, the leaves are long and willowy.

Flowers are pinkish, bottlebrush shaped spikes produced near the ends of the branches that appear in late summer and fall when the days naturally become shorter. The flowers, because they are mostly hidden in the foliage, are of no special interest in this species but the related A. hispida (Chenille Plant) has 6 to 10 inch long, drooping spikes that make it suitable for use as a flowering pot plant. A newly commercialized species, A. pendula, has 2 to 3 inch long fuzzy pinkish-red spikes held above the foliage.

Copperleaf and Chenille plant were plants that made their début into American gardens during the close of the 19th century as a part of the show of large, often gaudy, displays used in Victorian bedding schemes. As these kinds of bedding arrangements gave way to more subdued schemes, the Acalyphas lost favor except in the near-tropical regions of southern Florida, Texas and California and in large American public park displays where they persist to this day as plants that are lifted and taken indoors for wintertime protection and propagation.

Copperleaf is a good summertime plant for the mixed flower border or large container where a plant that will grow 5 feet tall in a few months can be accommodated. Plants should not be set out until the soil temperature has warmed in late spring. It flourishes in summertime heat, but to grow really well it must be well nourished and kept reasonably moist. Plants have good drought tolerance but dry conditions prevent it from growing. They are best in full sun or light shade.  Propagation is easy by semi-hardwood cuttings. In the greenhouse during winter they are especially susceptible to mealybugs and spider mites.