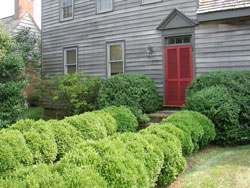 English Box was a traditional landscape shrub for many early American homes.

Being from the British Isles, it's not surprising that the garden plants of choice for our founding fathers had a certain Anglo-centric feel. Of these, none is more typical than the common boxwood, Buxus sempervirens.

In nurseries, boxwoods come in two basic flavors: Buxus sempervirens which occurs widely in Western Europe from the English isles to northern Africa and B. microphylla which occurs in East Asia from northern Korea, through Japan and in adjacent areas of China. Though there are more than 80 species in the genus, these two have the hardiness to grow in temperate gardens.

The European species has a narrower leaf with a slightly blue-green cast and is actually a small understory tree in its wild form. However, as perhaps the oldest known ornamental plant in western gardens, selected clones have been passed on for centuries so several distinct growth forms are commonly seen. The "American" boxwood is a tall growing clone that grows 12- to 15-feet tall in 50 years and is offered in the nursery trade as 'Arborescens.' The earliest mention of this imported shrub in the colonies was in 1652.

The "English" ('Suffruticosa') box is a dwarf form popular for formal parterre plantings, edging and foundation plantings. It has dense branching and, if unpruned, grows as a cloud-like mound 4 to 5 feet tall and 6 to 8 feet wide. It's said to never flower. If relentlessly clipped, it can be kept under a foot tall for decades.

Because the species occurs over such a wide geographic range in Europe the winter hardiness varies considerably. Some clones are only hardy to zone 6 while others are hardy to zone 4. Telling boxwood clones apart is almost impossible, especially if hedge shears have been used to keep the plants in bounds.

Boxwood wood is so dense and heavy, it sinks when put in water. Before the advent of plastics it had many applications. The best wood-block prints were made using crosscut sections of Turkish boxwood. Today wooden chess pieces are carved from boxwood with the white pieces having their natural color.

Boxwoods have a reputation for being finicky, but in reality they just need attention to site selection. Plant them in a sunny to lightly shaded site that doesn't get too hot during the summer months or experience dry, cold winds in the winter. They do best in well-drained soils that have a soil pH above 6.2. In many parts of the Southeast, adding dolomitic limestone prior to planting could be helpful to ensure establishment. Keeping boxwoods mulched to maintain uniform soil moisture is beneficial for the shallow roots.

A number of problems bedevil boxwoods. In Colonial capitols such as Williamsburg and other antebellum homes, boxwood decline, an ill-defined malady that has slowly killed many of the old boxwood plantings, has been a problem in recent years. Newer introductions, either selections of the Asian species or hybrids of it, seem to be immune to the problem.

Winter burn is a common problem for these evergreen shrubs in areas exposed to bright light and strong north winds in the winter. In many areas, root knot nematode (especially in sandy soils) and root rot attack older plants and cause a slow decline with parts of the plant dying back over several years. Because boxwoods are most often used in formal planting arrangements, these afflictions often destroy the effectiveness of the original design. Replanting the same boxwood clone in the affected area is not recommended.

But the most common problem with boxwoods is that they get larger than expected. Over a decade or two boxwoods often outgrow their planting site and need pruning. If summertime clipping will no longer hold the plants in bounds, boxwood can be pruned back severely in early spring just before new growth begins.