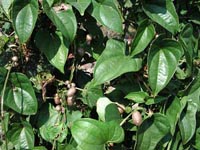 Aerial tubers form on the cinnamon vine each fall and are an easy means of starting new plants.

Move to a new area, and you always make the acquaintance of new plants. Over 30 years ago, I arrived in Arkansas fresh from graduate school and pretty sure I knew most of the plants I would encounter. Since then, I have been humbled many times as I attempt to learn the local flora.

The first occasion was during a visit to a seed store on the Fayetteville square - one of the old fashioned kinds where the owner dipped seeds from various odd shaped containers using wooden dippers. There I encountered brownish-green, golf ball-sized tubers from a most unusual plant.

The plant, I finally learned, was Air Potato ( Dioscorea bulbifera ). This twining vine, and its more common relative called Cinnamon Vine ( D. batata ), are both Asian imports that grow around old home places and occasionally have escaped into the tangled undergrowth in cool, woodland settings. The latter species has naturalized from New England to Texas .

These plants are monocots and belong to the tropical yam family. They should not be confused with the sweet potato, often erroneously called "yam," which is a dicot and a member of the morning glory family.

True yams form starchy, thick-skinned tubers that have little or no sweetness. They contain almost no beta-carotene, the orangish pigment that gives sweet potato its distinctive color. In the tropics, true yams are the third most important root crop where they are eaten boiled or fried. They also can be dried and have been used as a hedge against dry-season hunger.

Cinnamon vine, so named because the foliage is said to have a cinnamon scent when crushed, forms large, edible, long-lived underground tubers. Air potato has an insignificant in-ground tuber but the aerial tubers are edible and weight up to a pound. Cinnamon vine is more winter hardy and will survive as far north as Zone 5; air potato is only hardy to Zone 7.

The bizarre thing about these plants is that each fall they produce heavy crops of aerial tubers along the vines. The pock-marked aerial tubers are, for cinnamon vine, about the size of the end of a man's thumb while golf ball sized or larger for air potato. New plants start easily from these aerial tubers and are the main means of escape into the wild. The tops are frost tender and freeze to the ground with the first freeze.

Their leaves are glossy-green, heart-shaped and 3 to 5 inches long. These vining plants are modest growers - at least as vines go - and seldom produce vines longer than six or eight feet in length. They lack appendages to climb trees, so need a trellis or fence for support. If an upright support is lacking they are happy to sprawl over the ground or on top of low growing shrubs. The vines of cinnamon vine twine clockwise while they are counterclockwise on air potato.

Cinnamon vine and air potato are easy to grow and are sometimes seen in the collections of plantaholics. They are pass-along plants, not normally offered in the nursery trade. Because of their twining and sprawling ways and great persistence, make sure you really want it before planting one. They can be effective in covering out-of-the-way chain-link fences or similar places where you want a plant that will fend for itself.

They grow in full sun or moderate shade. Both of these yams appear completely unaffected by pest or disease.