Plant of the Week: Laurel, Cherry 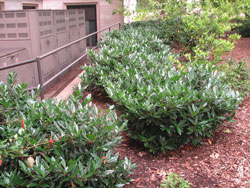 Cherry Laurel is a broad-spreading evergreen shrub that is well suited for massing and screening.

Cherry laurels, also called English laurels, are an old-fashioned shrub that has long been an important part of gardens in Europe and America. Over the three centuries since it was first introduced, it has come and gone in popularity several times. Today, in the southeastern states it's enjoying a revival.

Prunus laurocerasus is a member of the cherry family that, in wild places of Asia Minor and southwestern Europe where native, it grows as a round-headed, 25-foot tall evergreen tree. In gardens, dwarf forms have been selected so it's usually seen as a large, evergreen shrub 4- to 8-foot tall and wide. It has 3- to 5-inch long brooding, dark green leaves that thickly clothe the limbs.

In the spring, cherry laurel produces 4-inch long spikes of white, odiferous flowers that look like a typical cherry flower except they are only about three-eighths of an inch across. Small, marble-sized, blackish fruit are produced but have little to recommend them for eating.

Cherry laurel has been known in Italy since the middle years of the 16th century when a traveler established plants in a garden in Genoa. About 1576, it was introduced into northern Europe by the Flemish doctor and botanist Carolus Clusius (1526 - 1609), the man who introduced gardeners to tulips. Clusius nursed a half-dead specimen back to health after receiving it in a shipment of plants from a correspondent in Constantinople.

For the first half century, cherry laurel was thought to be too tender to grow outdoors in the English climate, but, by the middle of the 17th century, it had become common in estate gardens where it was grown as a clipped hedge in espalier plantings. By 1730, the naturalistic style of Capability Brown had become popular in English gardens so cherry laurel was planted "close together in large thickets and permitted to grow rude." It became ubiquitous in gardens during this period, and picked up the "English laurel" name.

Not surprisingly, enterprising souls began experimenting with the plant and soon began producing an almond-scented extract from the leaves called "laurel water" that was used to flavor everything from puddings to alcoholic beverages. This almond scent was, of course, produced by hydrogen cyanide, a highly poisonous compound. After several notable accidental poisonings in the 18th century, the leaf extract was no longer used in cookery, but it became standard fare for Victorian authors wanting to murder someone.

Cherry laurel, like all members of the cherry family, is especially susceptible in poorly drainage sites. In a good, fertile planting site it's fast growing and drought-tolerant once established. It will grow in full sun or medium shade. Plant size can be easily controlled by shearing. Plants are usually considered winter hardy in zones 6 through 8, but the dwarf, spreading cultivars listed below are hardy through zone 5.

Cherry laurel is always offered as a cultivar with 'Otto Luyken.' 'Schipkaensis' and 'Zabeliana' the most commonly offered. The first two grow 4 to 5 feet tall and twice as wide; the last grows 3 feet tall and spreads to 12 feet wide. 'Magnoliifolia' (also called 'Parkway') is a large. leafed form with leaves 6 to 8 inches long and 3 inches wide. It can grow to 20 feet tall.