Plant of the Week: Kwanzan Cherry 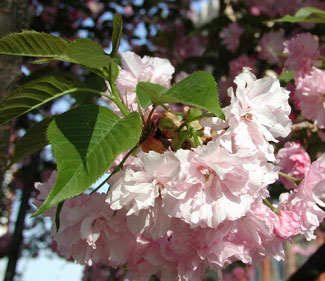 I love trees in all sizes and forms. The giant shade trees inspire and humble me while the smaller flowering trees gladden my heart as spring approaches.  A group of flowering trees I have been interested in growing is the Japanese flowering cherries, and now with the expansion of the Arboretum at the Botanical Garden of the Ozarks, I plan to indulge this whim. One of these, the Kwanzan Cherry (Prunus serrulata ‘Kwanzan’) is the most common Oriental cherry in the United States.

The Kwanzan Cherry is a 25-to 30-foot- tall deciduous flowering tree that blooms mid-spring. It is usually grafted onto a 4-foot-tall trunk of bird cherry rootstock, giving it its distinctive vase shaped form closely resembling a martini glass. It has a gray trunk crosscut by darker gray bands, or lenticels, that give most cherries an easily recognizable characteristic.  It can be grown on its own roots and if found this way makes a more naturally appearing and – at least to me – appealing tree with a more rounded overall form.

Kwanzan leaves appear with the flowers and begin with a maroon shade that gradually transforms to a medium green. The leaves have a pair of relatively large distinctive glands at the base of the leaf blade that provide another ready means of identifying all kinds of cherries. Fall color is usually yellow orange.

The pink, 2-inch diameter powder-puff flowers contain from 24 to 28 petals, and because all of their necessary floral components have been morphed into petals, they almost never produce fruit. The flowers are borne in clusters of three to five blossoms at each node and produce an exuberance of color seen in few other flowering trees.

Kwanzan cherry is an old clone that is recorded in a Japanese catalog dating back to 1681. At the time it was listed as “Sekiyama,” but because the characters in the name can have several meanings, it is thought to be the same tree. The difficulty of transliterating Japanese characters to Western languages has long been a problem, so not surprisingly an old clone like this one has several recorded for it over the years.  ‘Kanzan’ is the name commonly used in Japan with ‘Kwanzan’ an old mistranslation that stuck in the West. According to the rules of botanical nomenclature, it should be known as ‘Sekiyama’, the first published name for the clone. 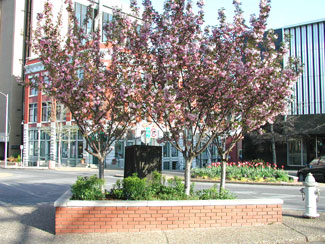 Japanese flowering cherries have a long history of cultivation in that country. Several wild cherry species grow together in the mountains and foothills and, because cherries are a promiscuous lot, many of the more handsome and vigorous clones are naturally occurring hybrids.  During the feudal period in Japan uniquely floriferous cherries were selected from the wild and presented as gifts to land owners or officials of the court. Generally these were not propagated for to do so would lessen the significance of the gift. But, over time, the best and most outstanding were identified and found their way into commerce.

The Japanese flowering cherries began appearing in the United States after about 1880 but remained relatively obscure until the “cherry diplomacy” instigated by David Fairchild lead to the planting of thousands of flowering cherries around the Washington D.C. tidal basin in 1912. The trees were a gift of the Japanese government and remain an important attraction of our capitol city. Of the almost 3,500 ornamental cherries growing in this old planting, most are Yoshino cherries, but are followed closely by Kwanzan cherries.

Because cherries belong to the rose familym they are afflicted by a long list of insect and disease problems. Though they are not usually considered long lived – 25 to 35 years being an average estimate – they can be kept going for a long time by careful site selection and corrective pruning as needed to improve plant vigor. They are most often used as small flowering specimen trees in the open lawn or near patios or entryways where the blooms can be enjoyed up close.

They are best in full sun in a well-drained fertile soil. Their hardiness ranges from 5 through 8 but hot, dry summers can shorten their life span. As trees get older rejuvenation pruning by cutting back major limbs can help invigorate the plants and keep them producing new growth and flowers.