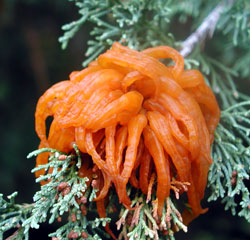 These ugly gelatinous galls are part of an interesting disease complex affecting cedars and apples.

With spring rain, junipers all over Fayetteville have turned orange, as if in flower. On closer inspection, it’s obvious these are no flowers. No, they’re the orange, gelatinous telial horns of cedar-apple rust.

Until recently, fungi were considered part of the plant kingdom, so I feel discussing this interesting disease is not straying too far afield from our weekly chat about plants.

Cedar apple rust is one of those peculiar, but intriguing diseases requiring two host plants to complete its life cycle. It winters as a golf ball-size purplish gall with brain like folds on the branches and small twigs of our native cedar tree, Juniperus virginiana.

With the arrival of spring rains, the galls quickly grow gross looking, orange, gelatinous telial horns that produce spores which blow to the unfolding leaves and developing fruit of nearby apple and crabapples trees.

On immature apple leaves, spores germinate and produce a quarter-inch circular, hard, yellowish infection that, in midsummer, produces small horn-bearing spores of its own. Because it causes premature defoliation and infects the fruit, it’s an economically important, but non-lethal, disease of apples. Spores blow back to the cedar tree and reinfect it.

Alternate host rust diseases have been observed for a long time. On April 25, Roman priests celebrated the feast of Robigus, the god of grain. Their festival involved the sacrifice of a red dog, because it was at this time that the reddish spore stage of wheat rust appeared, a serious disease that could destroy the crop.

The alternate host for wheat rust is the common barberry, Berberis vulgaris. During the Middle Ages, and perhaps before, it was thought to be associated with wheat rust in some mysterious way, but exactly how was unknown. But as early as 1660, a barberry eradication act was passed in one northern French city; in 1755 Massachusetts Colony enacted a ban of its own.

These were the days before the discovery of the germ theory. Diseases were thought to develop spontaneously or by means of “bad air.” The first microscopic examination of wheat rust was in Italy in 1767, but it was not until 1865 that the French mycologist Anton de Bary teased apart the bewildering array of spores involved in the development of a two-host rust disease.

During the last decades of the 19th century, railroads were busy touting the Ozarks as the ideal place to grow apples, promising newcomers cheap land and high yields. By the first two decades of the 20th century Washington and Benton counties had become the largest apple growing region of the nation.

In the 1920s, legislation was passed requiring eradication of cedar trees from the counties in an attempt to eliminate the disease. Obviously neither the eradication program nor the apple industry stuck, for we see lots of junipers but few apples.

General purpose fruit sprays - applied during the spring when frequent rainfall washes off the protective film of fungicide - are a possible means of control, but it’s not especially effective for just a tree or two.
Growing disease-resistant cultivars is a better remedy; unfortunately most commercially important apple clones are susceptible to the disease.

Crabapples, because they’re not grown for their fruit, fare better. A number of plant collecting stations evaluate crabapples for disease and have developed lists of resistant clones. ‘David,’ ‘Donald Wyman,’ ‘Prairie Fire,’ ‘Profusion,’ ‘Red Baron,’ ‘Snowdrift,’ and many others all have good resistance to the three major diseases afflicting apples - cedar apple rust, apple scab and fire blight.