Plant of the Week: Rhododendron, Catawba 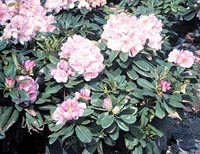 There’s often a fine line between passion and obsession. Anyone seriously engrossed in his or her hobby sometimes feels the nagging doubt that maybe, just maybe, they have stepped over that line. But for gardeners, this compulsion leaves a tangible product that the rest of us occasionally get to enjoy.

Lendonwood Gardens at Grove, Okla. is just such a place. It was created and is cared for by Len Miller. Miller recently donated the garden to the city of Grove. It’s open year-round. There’s a small honor system admission price.

The garden is a 5-acre site on level ground under the high canopy of hundred-year-old post oaks. It’s designed along the lines of a Japanese garden but with plenty of varied and interesting plants thrown in to maintain the interest of the most collection-oriented gardener.

Grove, about 45 miles northwest of Siloam Springs on Oklahoma Highway 59, is hardly the place one would expect to find extensive collections of rhododendrons, more than 300 kinds of dwarf conifers and Japanese maples, but these are the garden’s specialties. The garden also has more than 500 daylily cultivars and more than 100 hostas.

Miller, a retired dentist, began this phase of the garden in 1995 and completed planting within 18 months. He has since added a Japanese tea house, a large water feature and other amenities to make the garden attractive throughout the year. His collection of more than 100 bonsai plants are on display in the Zen garden.

But of all of the plants, rhododendrons remain one of his strongest interests.

The Catawba Rhododendron is native from Virginia to Georgia in the Smoky Mountains. It’s the most hardy of the true rhododendrons. While botanists classify azaleas and rhododendrons in the same botanical genus, gardeners make a distinction between them in both their culture and usage.

Rhododendrons are usually considered more difficult to grow than azaleas, but that long believed convention may be misguided. Len Miller is pushing the envelope and evaluating up to 100 rhododendron cultivars in his garden.

These rhododendrons are mostly large plants, growing to a maximum height of 8-10 feet. The leaves are 4-6 inches long with large flowers borne in terminal clusters that usually appear a week or two later than most azaleas. Flower colors range from purple to red, pink and white. Hundreds of selections and hybrids have been made of rhododendrons, and in recent years they’ve been shipped in large numbers from Oregon nurserymen to garden centers throughout the country. The suitability of many of these selections to our Southern climate is uncertain, so do some homework before buying, or buy a single plant for a trial in your own garden.

Preparing the soil for rhododendron plantings requires the addition of lots of organic matter on top of the existing soil. Len Miller prepared his beds by hauling in a 2-foot layer of chipped limbs a year in advance of planting and allowing this to compost down. After six months of composting, he tilled the chipped limbs to speed the composting process. This left him with a spongy, 6-inch layer of organic matter in which to plant the rhododendrons.

Miller also added a small amount of peat moss to each planting hole and mulched with pine bark. Because azaleas and rhododendrons are shallow rooted, they have to be watered carefully to insure they’re kept uniformly moist but never too wet.