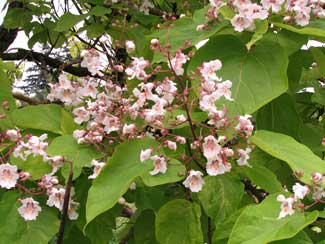 The Southern Catalpa is a large showy tree often seen in gardens and parks throughout the eastern United States but those who write about trees shun it. (Image courtesy Gerald Klingaman)

Twenty-five years ago my wife and I tried a short stint at country living, buying one of those places that was too big to mow and too small to farm. Along the road to our small acreage we passed a real farm with a creek running through it with a magnificent stand of catalpas that in mid-May of each year came to life with masses of white blooms. For such a beautiful tree when in bloom, it is a bit of a surprise that it is so seldom met with in contemporary gardens.

There are six species of catalpas described in the world with two species, Catalpa bignonioides (the Southern Catalpa) and C. speciosa (the Northern Catalpa) native to the United States.  Catalpa belongs to the bignonia family that is most easily recognized by its long, cigar shaped pods. The Southern catalpa is native in a swath from northern Florida to Georgia, west through southern Alabama and Mississippi. Northern catalpa’s natural range is along the confluence of the Mississippi and Ohio River from Southern Illinois and Indiana to along Crowley’s Ridge in northeastern Arkansas. Both species are reliably winter hardy (zone 4) so have been used extensively in gardens throughout the central and eastern states.

These two species are very similar in appearance and probably arose from a single species that ranged throughout the eastern deciduous forest prior to the last great ice age. Ice sheets bulging south out of Canada pushed as far south as northern Missouri and southern Indiana, probably resulting in two isolated stands of the species when the glaciers began retreating 15,000 years ago. These two stands then gradually took on their distinctive characteristics we see today.

Leaves are heart-shaped and 8 to 10 inches long and 4 to 6 inches across. Southern catalpa leaves give of a foul odor when crushed while leaves of the Northern catalpa smell more like normal green vegetation. Fall color of both species is a mid range yellow and is good during most years.

The large white catalpa flowers are produced in erect, terminal clusters in late spring or early summer. Individual flowers are tubular and to 2 inches long. The inside of the throat is usually marked with purple lines and yellow blotches. The Northern catalpa usually blooms about two weeks earlier than the Southern catalpa but is considered to have a smaller flowering truss.

Following blooming, catalpa flowers produce the long, slender pods that remain on the trees through the winter with seed release in the spring. The Northern catalpa has pods that are slightly slimmer in diameter and up to two feet in length while the Southern catalpa usually has pods less than 12 inches in length. The colloquial names of “Indian bean” or “Indian cigar” come from the long pods.

Catalpas are interesting and attractive trees in the landscape but they are messy, especially when their seed pods open and fall in the spring. The windborne seeds disperse widely and unwanted volunteer trees are common, making them, paradoxically, an invasive native tree.  If they are used in the landscape, they are best suited to the large property or park where the flowers can be seen from a distance.

They are best suited to sunny or partially shaded sites with deep, relatively moist soils.  They will adapt to drier sites and can tolerate considerable drought once the roots are established.  They are best transplanted as smaller trees either from a container or with a ball of soil. The catalpa worm, a lepidopteron worm that completes its life cycle in a single tree, is a favorite bait for fishermen throughout the South.