Plant of the Week: Canterbury Bells 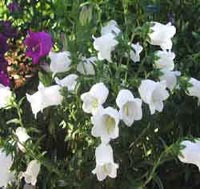 Bellflowers are an intriguing group of garden flowers that mostly bloom following the spring bulbs but before the summer perennials such as daylilies. Of the 300 or so species scattered across the northern hemisphere, the showiest is Canterbury Bells, Campanula medium.

Canterbury Bells is a biennial. During its first year of life, it grows as a dinner plate size rosette of leaves with little to distinguish it from a common weed. The leaves are evergreen in Arkansas' climate.

But in the spring of its second year, the rosette begins to elongate and masses of bell-shaped flowers are produced in an open panicle. Plants usually branch from the base of the rosette with the central stem reaching 3 feet high while surrounded with side branches only 1-2 feet tall.

The blooms are in shades of blue, purple, pink or white with the 2-inch long flower tube the diameter of a fat hot dog. In the typical form, the calyx is not showy, but in the selection known as the Cup-and-Saucer Bellflower, it is considerably enlarged and colored the same shade of the flower. This form has the general appearance of a long-trumpet daffodil but in blue.

Canterbury Bells are native to the mountains of southern Europe and have been grown in gardens since at least the beginning of the 19th century. The Victorians especially seemed to appreciate their gaudy beauty and were willing to put up with their demanding ways to grow  them successfully.

They are more popular in northern climes but can be grown in our southern gardens if planting schedules are adjusted to our conditions.

The current crop of Canterbury Bells in bloom in my garden is from seed planted in the fall of 2000. My plan was to grow the plants in the greenhouse in pots until the coldest part of winter was past and then move them outside to the cold frame where they would have a couple months of chilling before being moved to the garden. My theory was that this vernalization period would satisfy their needs and reduce the length of time needed to get the plants to bloom.

It didn't work. When the plants were planted in the garden in May 2001, they simply set there and thumbed their nose at my futile effort to trick them into early bloom. When the plants bloomed this year, they were worth the wait, but I decided a new production strategy was called for if these are to be grown again.

I've never seen bedding plants of this species available, so you'll have to grow your own plants. The easiest way is to plant seeds out of doors in May or June and grow the plants vegetatively that first year in some out-of-the-way corner of the garden. The plants could be grown in the soil in a sunny, well-drained corner of the vegetable garden or they could be produced in gallon nursery containers.

Foxgloves can be grown the same way and having several different species to tend will increase the odds of having something be successful.

In the fall at pansy planting time, the Canterbury Bells plants should be moved to the flower bed where they will bloom the following spring. Plants can be grown in full sun or light shade. They do best in a moderately fertile soil with a near-neutral pH. Staking may be required when the plants begin producing their bloom display.