Plant of the Week: Cactus 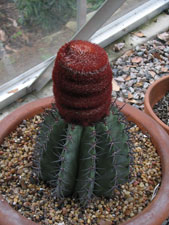 This Melocactus from Peru has a topknot called a cephalium which is where the flowers form. The areoles are arranged in rows down the pleated ribs of the cactus body.

Love them or hate them, cacti are hard to ignore. The fairer sex seems to find these bizarre and prickly plants downright ugly, but if you’re ugly, you gotta be tough. Cacti survive in environments most plants shun, so this toughness and adaptability makes them favorites of many plant fanciers.

More than 2,000 species of cacti have been described with all – save one errant species that probably migrated to Africa in the gut of a bird – native to the Americas. Most, we associate with deserts, but some grow with orchids in the branches of trees while others invade the grasslands of our prairies.

Except for the Pereskias, all cacti are leafless with photosynthesis taking place in modified stems. In some species, such as the epiphytic Christmas cactus, the stems are flattened and leaf-like, but in most, the cactus body grows as either an elongated column or a fat, round ball. Some species are tree-like with one main stem while others are shrub-like and branch freely to form dense colonies.

Some species produce both the large, threatening looking spines and the tiny glochids that break off in the skin and cause more suffering than the puncture wound of a spine. These spines are an obvious and highly effective method of preventing predation.

Looking down on a cactus from above you notice the trunk is composed of a series of accordion-like pleats. These folds allow the cactus body to expand and contract, according to the amount of moisture present. When it’s dry, the pleats become more pronounced; when engorged with water, the stem swells and the pleats round out.

The roots too have adapted to survival in a dry environment. Cactus roots are usually quite shallow – in the 4- to 6-inch deep range – and are wide-spreading in relation to the size of the plant. Root cells also have a high salt content, so when a rain occurs, water quickly moves into the roots.

Once a cactus plant has absorbed water it’s stingy to give it up. The leafless, wax-covered cactus body itself has a much lower surface area than a normal leafy plant so this accounts for much of its water efficiency. More efficiency is achieved by using a special kind of photosynthesis.

Adaptation is the name of the game in the cactus family. The unique appearances of the cacti are manifestations of how they have evolved to survive in a dry, inhospitable land. Most species can endure months without water while a few have been known to go for several years. Try that with your average philodendron!

Caring for cacti is not especially difficult provided you’re not heavy-handed with water. Use a potting soil mixed with half sand or half gravel. The sand or gravel in the soil mix helps ensure good drainage, but more importantly, provides ballast for the plant as it grows. Cactus plants get decidedly top heavy and the extra weight in the pot will be needed as the plants grow. Don’t be in a rush to repot cacti, especially the tall-growing species, because smaller plants are easier to display and deal with.

Cacti are best kept outside during the summer months but acclimate them gradually to increased light if they have been inside during the winter. Once acclimated, give them as much sunlight as possible. Usually, little summertime watering is needed, instead just allowing natural rainfall to do the job. Cacti are not heavy feeders, so use fertilizer sparingly and only during the summer months when the plants receive extra moisture.

In the winter, move the plants to a bright, but cool, location and allow the plants to go completely dormant. Water only sparingly, perhaps on a monthly basis, until light improves in the spring and then increase watering gradually as the weather warms. If the cacti are old enough and plants have received chilling during the winter in a cool greenhouse, flowering should occur in late spring.