Plant of the Week: Burning Bush 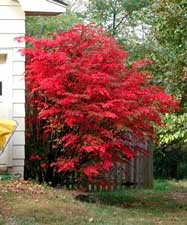 Burning bush euonymus is one of the most dependable shrubs for producing an effective fall color display. Its winged branches provide its other common name, winged euonymus

Think fall color, and trees changing vibrant shades or red and orange come to mind. But a few shrubs also have dazzling hues. Of these, the burning bush euonymus (Euonymus alatus) is the most striking and dependable. Though it has long been used as a hedge plant, its days of popularity are now waning as changing times cancel out its many good attributes.

Burning bush euonymus is a large, flat-topped deciduous shrub in the bittersweet family. It's native to a large part of northeastern China and adjacent areas of Korea and Japan. Usually, it's seen as a much-branched wide spreading shrub growing 8-10 feet tall, though 20-foot specimens with a spread of 25 feet aren't uncommon.

It produces 2-3-inch long leaves from distinctive winged branches. The species epitaph "alatus" means "winged" and is the reason for another of its common names, winged euonymus. In the fall, the leaves turn brilliant shades of red with the display remaining effective for a week or more. Plants color as effectively in a warm climate as they do further north.

Small greenish yellow flowers appear after the plant has leafed out in the spring and are of little ornamental value. Small orange-red fruits are produced in the fall and are eaten by birds.

Burning bush was reportedly introduced into the United States about 1860. It was probably introduced to the West via the efforts of Carl Maximovicz (1827 - 1891), a botanist dispatched by the St. Petersburg Botanical Garden to investigate the flora of Manchuria aboard the Russian naval ship Diana. Between 1854 and 1856 Maximovicz explored coastal regions of Manchuria and ventured up the Amur River.

When he returned to St. Petersburg via an overland route through Siberia - a nine-month journey - he brought with him seeds and specimens of many new plants. Records show Euonymus alatus growing 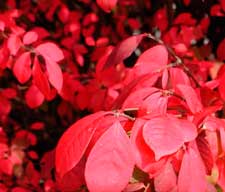 in the garden from his collection but don't give a date or place of collection. In the next two decades, Maximovicz went on to become one of Japan's most important botanist-collectors. He shared his material freely and was probably the source of the first garden plants in cultivation.

By 1900, burning bush was being grown in the nursery trade in this country. By the 1930s, it had picked up the common name "burning bush," a reference to the happenings described in Exodus of the Bible.

Burning bush, and especially the more dwarf form called 'Compactus,' became popular as hedge plants during the middle years of the century. But by the 1990s, it was over-planted and a bit shopworn.

About then people began noticing it had escaped into the woods with our two native species except it was a habitat generalist, not a specialist like wahoo and hearts-a-bustin'. Burning bush is now reported as a common escape in several New England states and throughout much of the Midwest. Massachusetts has taken the step of banning its planting while several states have added it to their invasive plants list but so far not banned its use. 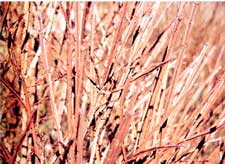 Burning bush illustrates the tension between a plant being adaptable and easy to grow and potentially invasive. This shrub survives in a wide array of soil types; it grows in varying light conditions and is moderately drought tolerant. It dependably produces an effective display of fall color each year and it's pliable in our hands, tolerating shearing without a whimper. And, unlike many

euonymus, it's immune to euonymus scale and has no other serious insect or disease pests. But it does have seeds and birds find them tasty.

It still has a place in many urban landscapes where its only likelihood of spread is to a neighbor's flower bed or a nearby abandoned lot. But, in areas where the landscape abuts open woodlands, species with less potential for spread should be chosen. Potential exists for neutering burning bush and several research teams are working on the problem. When sterile cultivars are released. Burning bush euonymus will again be the perfect shrub.