Plant of the Week: Fern, Boston 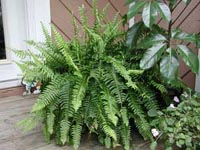 The numerous arching fronds of Boston fern give the plant a graceful appearance.

Of all the ferns, Boston fern is by far the most popular. In the century since its discovery, it has become a fixture on American porches during the summertime and a bane to homeowners everywhere during the winter.

Boston fern (Nephrolepis exaltata ‘Bostoniensis’) is a tender fern that grows in a tight clump and produces arching, feather-like fronds up to 4 feet long. Each pinnae is up to 2 inches long and get smaller at the terminus of the frond.

Spores are produced under the pinna in well ordered marginal rows covered with a kidney-shaped flap. But, unlike most ferns, Boston fern and its many kin are considered sterile. Instead of relying on spores, it propagates by slender stolons that dangle from the plant. Where these stolons contact the soil, a new plant forms.

The species from which Boston fern originates is native throughout Florida and is scattered around the Pacific Rim in tropical areas. Boston fern originated in a shipment of 200 plants sent from a Philadelphia florist to F. C. Becker, a florist in Cambridge, Mass. During the Victorian era, ferns were wildly popular as parlor plants.

Becker recognized one plant in the shipment was faster growing, had wider fronds and an unusual drooping habit, instead of the stiffly upright form of the species. He began to propagate it in 1894. Two years later, botanists in London identified the plant and suggested the Boston name for the variant form. It quickly became popular throughout the industry.

Boston ferns cause a real dilemma for homeowners. On our front porches in the summertime, they make beautiful and graceful additions. Because they are so easy to grow, they have a way of pumping up our ego so, by the time winter arrives, we have developed an attachment to them.

But, as easy as they are to grow outside, they’re equally difficult to grow inside. In reality, they aren’t that hard to keep alive inside, but unless you have a bright, cool and humid location, survival is about all you can expect. Those beautiful, graceful fronds we so admired in the summertime now shatter and leave us with a first-order mess as the plant struggles to adapt to the dark, dry environs of our wintertime haunts.

Leaving the plant outside and testing for winter hardiness (they aren’t) is an option, but most of us valiantly struggle to keep them over another year. If they are to be in the immediate living space, trim as many of the older drooping fronds as possible and leave that mess outside. Retain the upward pointed (youngest) fronds since they’ll most likely adapt to conditions indoors.

If possible, locate them in a cool bedroom (50 to 55 degrees is ideal) with a south-facing window. Then, put down a sheet to catch the fallen fronds and hope for a short winter.

Boston ferns can be kept fairly dry during the winter, but as the days begin to lengthen in February, start watering a bit more as new fronds appear. Avoid the temptation of putting the plants in an ever-larger pot, because they will eventually get too large to accommodate.

Instead, divide them in late winter every couple years to keep them vigorous and growing. Fertilize with any houseplant fertilizer once a month during the spring and summer. They’re not heavy feeders, but some fertility is required to keep them growing.